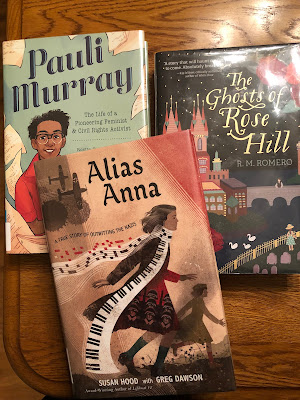 Pauli Murray was a trailblazer who spent her life fighting for civil rights and women's rights. Writer, lawyer, activist, priest, Pauli was a champion for justice. She was a thorn in the side of white America demanding justice and equal treatment for all. She was a queer civil rights and women's rights activist before any movement advocated for either--the brilliant mind that, in 1944, conceptualized the arguments that would win Brown v. Board of Education of Topeka; and in 1964, the arguments that won women equality in the workplace.

Throughout her life, she fought for the oppressed, not only through changing laws, but by using her powerful prose to influence those who could affect change. She lived by her convictions and challenged authority to demand fairness and justice regardless of the personal consequences. Without seeking acknowledgment, glory, or financial gain for what she did, Pauli Murray fought in the trenches for many of the rights we take for granted. Her goal was human rights and the dignity of life for all (Publisher).

Review: The heading for this post is inaccurate as this book is not a novel. Here Pauli Murray's life is immortalized in a biography told in verse. As I read this very thorough biography two thoughts kept running through my head. One: how is it that I, a former high school librarian, had never heard of Pauli Murray before? And two, why on earth was such a fact heavy book written in verse? These two thoughts still confound me. Let's just put it this way -- Pauli Murray was an amazing and brilliant woman whose writings were used by others to form the basis for several well-known pieces of legislation and landmark Supreme Court decisions. If you, like me, have never heard of her you must remedy that situation immediately. One of the authors, Rosie Stevens-Holsey, is Pauli Murray's niece and is proud to help promote her aunt's legacy. About the format, the biography-in-verse makes the information approachable and enjoyable, reminding me that I don't have to be reading a stodgy old textbook to find out new information. Make sure your school and public libraries have copies of this book.
Rating: 5 stars

Sent to stay with her aunt in Prague and witness the humble life of an artist, Ilana Lopez—a biracial Jewish girl—finds herself torn between her dream of becoming a violinist and her immigrant parents’ desire for her to pursue a more stable career.

When she discovers a forgotten Jewish cemetery behind her aunt’s cottage, she meets the ghost of a kindhearted boy named Benjamin, who died over a century ago. As Ilana restores Benjamin’s grave, he introduces her to the enchanted side of Prague, where ghosts walk the streets and their kisses have warmth.

But Benjamin isn't the only one interested in Ilana. Rudolph Wassermann, a man with no shadow, has become fascinated with her and the music she plays. He offers to share his magic with her.

Review: Right before COVID hit the world, my husband and I were in Prague. While there we visited the Pinkas Synagogue and its adjoining Jewish cemetery. Nearly all of Prague's Jews were rounded up and killed in the Holocaust. This particular synagogue now stands as a reminder of those 78,000 souls lost their lives because of their faith in Czech Republic. Their names are written out on all the walls of the synagogue. The cemetery is a seemingly crowded place with tombstones on top of tombstones. The Jews were forced to bury their dead on top of each other because the city would not allow the congregation to expand the footprint of the cemetery.
Though The Ghosts of Rose Hill is not an explicit historical novel it does include information about Pinkas cemetery and other Jewish cemeteries in the city of Prague which have fallen into disrepair due to the fact that so few Jews now live in the area. The book also covers information about the 1918 Flu Pandemic which killed Benjamin, one of the ghosts in this story.
There is a decidedly creepy vibe about the story. Magic shimmers in the background of the tale and evil makes itself known. In fact, Ilana must fight for her life and for Benjamin's release from his captor, making the story quite exciting in places.  I'm sure that students who enjoy reading supernatural/fantasy novels will find a lot to like in The Ghosts of Rose Hill.
Rating: 3 stars.

When the Germans invade Ukraine, Zhanna, a young Jewish girl, must leave behind her friends, her freedom, and her promising musical future at the world's top conservatory. With no time to say goodbye, Zhanna, her sister Frina, and their entire family are removed from their home by the Nazis and forced on a long, cold, death march. When a guard turns a blind eye, Zhanna flees with nothing more than her musical talent, her beloved sheet music, and her father's final plea: "I don't care what you do. Just live." (Publisher)

Includes extensive back matter with original letters and photographs, additional information, and materials for further reading.
Review: Zhanna and Frina were young piano prodigies and very famous in their region of Ukraine. They were also Jews. When the Nazi's came calling they had little time to do much else than submit to them. But when given a chance to escape both girls ran, with their father's blessing. Their parents and most of their relatives were killed but the two sisters survived by changing their names and returning to the music which sustained them during the war. It is an incredible story of survival.
My husband and I listened to the audio version of the book together. Once we adjusted to the simplistic writing style, perfect for younger readers, we became quite captivated by Zhanna's story, which she had divulged to her family until her granddaughter, Aimee, asked for details of her life to complete a middle school assignment. This book is an extension of that project.
The book includes extensive back matter with original letters and photographs and additional family information to round out the story. Both my husband and I felt that the afterward made the whole story much richer by filling in details. We also discussed how important it is to read stories like this to round out what we know about the Holocaust and the Jewish experience during World War II.
Rating: 4 stars.

Posted by Anne@HeadFullofBooks at 11:23 AM