Review: AS I LAY DYING 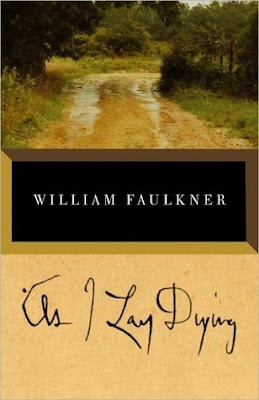 Several years ago I helped an English teacher orchestrate a reading project where students selected small groups and everyone in that group read the same book. The class had about ten titles to pick from. One of the choices was As I Lay Dying by William Faulkner. I had read most of the the other titles, so book talking them was easy. I hadn't read As I Lay Dying so I was forced to use the publisher's notes for my book talk. I said something like: "As I Lay Dying is considered to be one of the most important and influential novels of the 20th Century. Faulkner wrote it in a six-week period of time and did very little editing. It has lots of narrators and is written in the stream-of-consciousness style, like the way we all think. It is a story about a family who transports their dead mother home to be buried and troubles befall them." I don't think my book talk was very inspiring so I was surprised that a group of boys selected it as their choice.

Several weeks later, when the class project was complete, one boy handed back As I Lay Dying and asked me if I'd ever read it. I told him I hadn't. "Don't," was his reply. He went on to tell me that it was an awful book full of people's thoughts and super hard to figure out what was happening, sort of like a nonsensical dream.

I've been thinking about that boy and his command that I not read As I Lay Dying as I, too, have struggled to figure it out. I agree with him that the writing, the stream-of-consciousness style, was a little like a reading about a nonsense dream. Interestingly Faulkner used fifteen narrators in this fairly short book. Fifteen! And each one spoke differently than the others. Some, the more educated among the group, used proper spelling and grammar as they spoke in their thoughts. Others less educated used vernacular and had lots of incomplete thoughts or disjointed ones. Egads, it was hard to glean the action from their narrations. Even Addie, the dead mother, narrated a chapter.

And speaking of action, what was the story about? Well, Addie Bundren, the mother of five children now mostly grown, and wife to Anse, a stingy, backwards man, dies. Before her death she secures a promise that she will be buried among her family in town, some forty miles away from where the family lives. Even before her death her eldest son starts building her casket and plans are being made for the arduous trip via wagon to transport her home to be buried. But troubles follow the family from the outset. It rains so hard that the bridge across the river is washed out, fording the roiling river causes the mules to go down, the casket is nearly lost in the water, and Cash's leg is broken. Believe it or not things go downhill from that point. One would think that the family, joined in grief and duty, would be united in their task, but the motives of each person revealed themselves to be less than honorable. Anse was especially selfish as seen in the last lines of the book.

I had a feeling that I'd have trouble with this book, so I decided to watch the 2013 version of "As I Lay Dying" starring James Franko to help me out. The movie very closely to the book, using the actual dialogue, the multiple narrators, and all the details of the horrific quest to return Addie home to be buried. I didn't particularly like the movie either, but at least it gave me some pictures of the family, their abject poverty, and the Depression-era times. 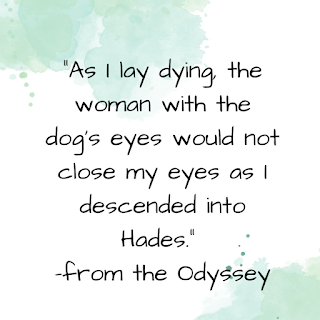 Faulkner published As I Lay Dying in 1930 and the story was set in Mississippi. Both the setting and the time frame were hauntingly realistic. And what about the title? Faulkner grabbed it from a line in the Odyssey. I'd say it is about perfect. The family certainly did seem like they were marching down to Hades.

Posted by Anne@HeadFullofBooks at 10:32 AM