Review and quotes: The Canterville Ghost 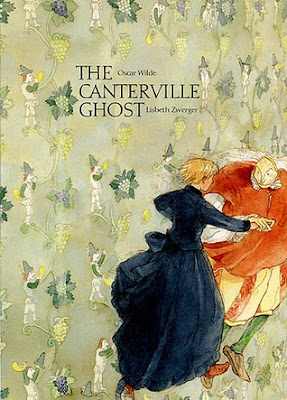 
When Mr. Hiram B. Otis, the American Minister, bought Canterville Chase, every one told him he was doing a very foolish thing, as there was no doubt at all that the place was haunted. Indeed, Lord Canterville himself, who was a man of the most punctilious honour, had felt it his duty to mention the fact to Mr. Otis when they came to discuss terms.


"Good heavens! child, where have you been?" said Mr. Otis, rather angrily, thinking that she had been playing some foolish trick on them. "Cecil and I have been riding all over the country looking for you, and your mother has been frightened to death. You must never play these practical jokes any more."

Summary: "The Canterville Ghost" was Wilde's first published story. It was originally published in two parts in the Court and Society Review in February and March of 1887. When the Otis family move into Canterville Chase they were forewarned about the ghost that haunted the place and indeed the very first night in their new home, they notice a spot on the carpet that the housekeeper assures them is blood but one she is unable to remove. When Mr Otis is able to remove the stain with Pinkerton's Champion Stain Remover they think all will go well. But the next morning, the stain is back. Several nights later the ghost decides to scare the new tenants to death. But when he breaks out his rattling chains routine, guaranteed to give anyone a fright, he is met by Mr. Otis himself holding a small bottle of Tammany Rising Sun Lubricator. He urges the ghost to use it unsparingly and the squeak should go away. From that point forward the whole family finds ways to flummox the ghost, who continues to try all his tricks at haunting the house and scaring the family. Now the trickster is having tricks played on him and he doesn't like it. One day the oldest daughter, Virginia, happens upon the ghost and decides to help him instead of playing another trick on him. For her help, she is richly rewarded.

Review: I really can't read horror novels or short stories because they honestly give me nightmares. But I decided to give "The Caterville Ghost" a try since I got a free copy of the audiobook/story and it is short. If I didn't like it, I figured, I wouldn't have wasted much time. I found, to my delight, that the book wasn't scary at all. In fact, it is quite funny. If you are looking for a funny ghost story, here it is.

Book Beginnings on Friday is hosted by Rose City Reader. Share the opening quote from current book.The Friday56 is hosted at Freda's Voice.  Find a quote from page 56.