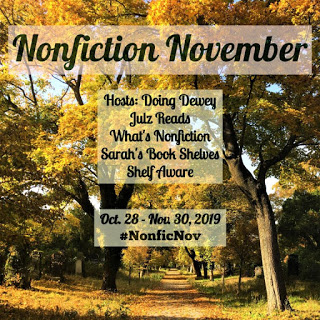 This week I am to talk about some of my favorite nonfiction titles and what makes them so great.

I really enjoy reading narrative nonfiction. What is that, you ask? Well, I used to tell my students that the facts are told in a story format so reading these nonfiction books often feels like you are reading fiction. I also enjoy learning something new. It makes reading interesting to me if I enjoy the format AND learn something new along the way.

Some of my favorites:

Midnight in the Garden of Good and Evil by John Berendt (pub. 1994)
"A beguiling and seductive reading experience." Set in Savannah, Georgia this is a murder mystery with a cast of quirky characters. It is hard to believe that this is not fiction. It really happened. This is one of the first nonfiction books I read after becoming a teen librarian and I was blown about by the genre. I liked this so much, I opted to read another narrative nonfiction selection by the same author, The City of Falling Angels, about a fire and troubles in Venice.

The Boys in the Boat: Nine Americans and Their Epic Quest for Gold at the 1936 Berlin Olympics by Daniel James Brown (pub. 2013)
"The Boys in the Boat is an irresistible story about beating the odds and finding hope in the most desperate of times—the improbable, intimate story of nine working-class boys from the American west who, in the depths of the Great Depression, showed the world what true grit really meant." Even though everyone knows that the boys won gold, the writing was so spectacular I found myself worried that they wouldn't. This was an excellent book club discussion book.

The Big Burn: Teddy Roosevelt and the Fire that Saved America by Timothy Egan (pub. 2009)
"Egan narrates the struggles of the overmatched rangers against the implacable fire with unstoppable dramatic force. Equally dramatic is the larger story he tells of outsized president Teddy Roosevelt and his chief forester, Gifford Pinchot. Pioneering the notion of conservation, Roosevelt and Pinchot did nothing less than create the idea of public land as our national treasure, owned by and preserved for every citizen. " We live in the Pacific Northwest and have driven past Pinchot National Forest. My husband and his father have both fought forest fires using a tool designed by one of the forest rangers highlighted here. I have enjoyed all the books I've read by Timothy Egan.

In a Sunburned Country by Bill Bryson (pub.2000)
"Every time Bill Bryson walks out the door, memorable travel literature threatens to break out." Set in Australia this book is sure to charm the most casual reader. Bill Bryson's books are not only informative they are hilarious. I find myself laughing out loud at many points in this and all his books.

Killers of the Flower Moon: The Osage Murders and the Birth of the F.B.I. by David Grann (pub. 2017)
"In the 1920s, the richest people per capita in the world were members of the Osage Indian Nation in Oklahoma...And then, one by one, they were killed off." David Grann inserts himself into the story in that he goes to Oklahoma and interviews relatives of the slain Osage members. This book is both interesting and maddening in equal measure. It is another excellent book club selection.

Grunt: The Curious Science of Humans at War by Mary Roach (pub. 2016)
"Grunt tackles the science behind some of a soldier's most challenging adversaries—panic, exhaustion, heat, noise—and introduces us to the scientists who seek to conquer them. " I've read five or six of Mary Roaches books and all of them are so informative yet hilarious at the same time. This one also has many very gross parts, but I was not off-put by them.

Just Mercy: A Story of Justice and Redemption by Bryan Stevenson (pub. 2014)
"Just Mercy is at once an unforgettable account of an idealistic, gifted young lawyer’s coming of age, a moving window into the lives of those he has defended, and an inspiring argument for compassion in the pursuit of true justice."My note on this book is that all of humanity should read it. Watch Bryan Stevenson's TED talk, too.

The Library Book by Susan Orlean (pub. 2018)
"On the morning of April 29, 1986, a fire alarm sounded in the Los Angeles Public Library." Orlean researches not only the fire but the history of the library and attempts to uncover the mystery of how the fire was set.

I could go on and on but I'll stop. I can recommend these books without any hesitation to most readers. Consider selecting a nonfiction title for your next read.

Posted by Anne@HeadFullofBooks at 12:54 PM