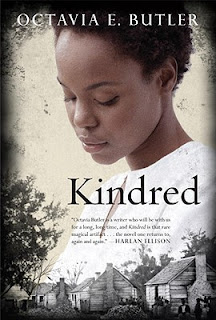 Kindred by Octavia Butler isn't a typical Sci-Fi novel, the type of book she was most famous for writing. But because there is time travel one might want to lump it into this genre of novels. But it is so much more and I would argue that it is really more historical fiction than any other genre. In it Dana, a 26-year old black woman suddenly time travels back to a plantation in Maryland in 1815 and ends up saving the life of her white, slave-owning ancestor, Rufus Weylin. She eventually travels back to her time period, 1976, but continually gets called back to save Rufus over and over again. Along the way Dana learns more and more about the horrors of slavery as she is continually thrust into the role of slave until she can find a way home again. She seems to have no choice. If she doesn't save Rufus she will never be born, yet she nearly dies every time she travels back in time.

Why should we read Kindred today? It is important for readers to understand the horrors of slavery and its role in shaping the America of today. And in a lot of ways Kindred helps the reader to see how a nice person (Rufus) can be made into a monster if they have too much power and if no one ever checks them. Rufus wants to have his way ALL the time because he's always had his own way. When he doesn't get it, he throws a fit, literally and figuratively, and generally behaves in a monstrous way. Then he blames his behavior on others. "Look what you made me do." Sound familiar? We probably know a lot of people that are this way but right now we have one at the head of our government. Sigh.

Marriage is a prominent theme in the book. Dana, who is married to a white man in 1976, was breaking sexual mores for that time period. As frowned up as it was in the 1970s there was NO interracial marriage in the 1820s. Yet, white plantation owners would think nothing of bedding and spawning children with their black slaves. They would also break up families on purpose to punish them, selling off children and spouses as if they were chattel. The heartbreaks piled up every day, every year. It is hard to imagine how horrifying life was for slaves during that time.

Another theme was education. Rufus and his father, though white and from the educated class could barely read and write. Of course slaves were not allowed to learn to read. When Dana arrived and they discovered she was literate and articulate, they didn't quite know how to respond. They would vacillate between asking for her help with documents and reading and punishing her for it. Every black child that she worked with was eager to learn to read. None of the "I can't be bothered" attitude.

Slavery, gender, power, and race are all prominent themes, also. This book just begs to be discussed in a English class or a book club. The famous spokesman, Frederick Douglass, once said that slavery and racism were the "twin monsters of darkness." The reader will certainly experience that darkness as they read Kindred.

Lest you think that a book written in 1979 has no appeal to you today, I encourage you to rethink those thoughts. The book is very readable and exciting (and enlightening and horrifying.) The first line in the book sets up the reader for the excitement ahead, "I lost an arm on my last trip home. My left arm." Nothing like a little foreshadowing to pique one's interest, eh?

I read this book as part of the Classics Club Spin activity. Though it was published less than fifty years ago it is considered to be a classic because of its themes. It has and will stand the test of time.

Posted by Anne@HeadFullofBooks at 1:48 PM