Audiobook review: Lincoln in the Baldo by George Saunders 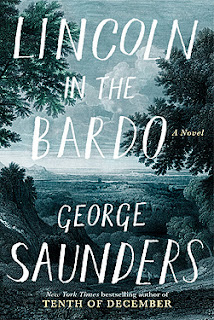 Late in 2017 a fellow blogger analyzed all of the end-of-the-year-best-books lists. She gave each book one point per list. In the end
Lincoln in the Bardo earned the most points. In other words, it ended up on more best-books lists than any other book published in 2017. That alone made me want to read the book. In addition our book group members selected Lincoln in the Bardo as one of our book selections for 2018, guaranteeing that I would actually read it carefully in preparation for the group discussion.

George Saunders started the book with this premise: after the death of his son to typhoid fever in 1862, Abraham Lincoln visited Willie's crypt and held the dead boy in his arms at least two times. Saunders decided to explore Lincoln's deep grief. Up to this point Lincoln was so distraught by his cares related to the Civil War but after the death of his son he seems able to channel his sorrow into true and abiding empathy for all soldiers, on both sides, and for the people trapped in slavery. Saunders said in a NYT Book Review,


"It seemed to me that the empathy was somehow a byproduct of the sorrow — a burning-away of his hopes and dreams that resulted in a kind of naked seeing of things as they really were...I came to understand Lincoln as someone so beat down by sadness and loss that he developed a sort of crazy wisdom — as if, in sadness, all of the comforting bromides that normally keep us from the harsher truths were denied him. Empathy might even thrive best in this state, where the easy comforts are denied us."

Saunders was able to give the reader an excellent feel for the time by including chapters full of quotes from letters, journals, and diaries written by individuals living during the period of time leading up to and right after Willie's death in 1862. One chapter, which comes to mind as I am searching my brain for an example, were all quotes about the moon on the night that Willie died. In true recollection fashion half the quotes said it was a moonless night, others said it was a full moon, while others talked about the pretty crescent moon. Each quote was read by a different narrator. (Listen to the YouTube video below for details about the audiobook experience.)

The other part of the book all takes place in the cemetery where Willie's body is laid to rest. Here he is met by ghosts (for lack of a better word) who are stuck in the bardo. "Bardo" is a Buddhist term used to describe the time between death and rebirth. All of the ghosts in the cemetery do not acknowledge that they are dead, referring to themselves as sick and their coffins as sick-boxes. But they do recognize that their existence is less than desirable and certainly not a place for a young child to hang out. Three of the ghost characters try with all their might to assist Willie in passing over, but his soul is stuck to the earth because his father, President Lincoln, hasn't let him go yet.

For a bit of literary fun, my husband noticed that the ghosts stuck in the bardo all seemed to have embraced one of the seven deadly sins while alive: greed, gluttony, lust, envy, sloth, wrath, and pride.
One, an old printer was just at the point where he would consummate his marriage when he died from a blow to his head, was naked with a throbbing member in the bardo (lust). Another, who was a pastor in life, couldn't get over that he hadn't gone to heaven after living such an exemplary life (pride). A third, who was a slave in life, couldn't let go of his desire for revenge toward his former owner (wrath). I am not sure I could name a character for each of the sins, but it was a fun exercise to try and identify each.

I listened to the audiobook of Lincoln in the Bardo and I have to say it was one of the most enjoyable experiences I have ever had with this format. The producer actually utilized 166 voice actors/people to read the different parts. It was incredible to hear all the varieties in voices as they read the actual quotes from historical documents. The main characters were read by Nick Offerman as HANS VOLLMAN , David Sedaris as ROGER BEVINS III, George Saunders as THE REVEREND EVERLY THOMAS, and Cassandra Campbell as the NARRATOR. For a partial list of all the readers, check here. You will find names you know like Susan Sarandan, Ben Stiller, Julianne Moore, and Bill Hader. It was quite a cast and an amazing listening experience. Click on the YouTube video below of George Saunders talking about the making of the audiobook. The diversity of voices reflects the diversity of people in America at that time in history, using "both high diction, low diction, and some dialect". Some of the quotes and voices are shockingly crass. In case you are feeling a bit prudish today, I wanted to warn you not to be shocked.


I'm hoping that my book club friends will listen to at least a few excerpts of the audiobook. In addition, I found these discussion questions from Penguin Random House which should be useful in helping us dig deeper into the unique aspects of the book.

After a week or two of contemplation I amended my initial rating of the book from 4.25 stars to 5 stars. It is a such a unique book with both its historical quotes from letters and diaries written at the time and the ghosts in the cemetery, it really feels like one of those books that should be read (or listened to) widely.