Book Beginnings on Friday is hosted by Rose City Reader. Share the opening quote from the book.The Friday 56 is hosted at Freda's Voice.  Find a quote from page 56.
Check out the links for the rules and for the posts of the participants each week. Participants don't select their favorite, coolest, or most intellectual books, they just use the one they are currently reading. This is the book I'm reading right now--- 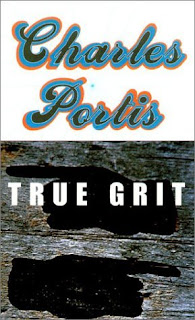 
“People do not give it credence that a fourteen-year-old girl could leave home and go off in the wintertime to avenge her father's blood but it did not seem so strange then, although I will say it did not happen every day. I was just fourteen years of age when a coward going by the name Tom Chaney shot my father down in Fort Smith, Arkansas, and robbed him of his life and his horse and $150 in cash money plus two California gold pieces that he carried in his trouser band.”


“I bought some crackers and a piece of hoop cheese and an apple at a grocery store and sat on a nail keg by the stove and had a cheap yet nourishing lunch. You know what they say, "Enough is as good as a feast.”

Comments: I am listening to the audiobook of this classic western story, True Grit. The story is told by Mattie Ross fifty years after she sought to revenge the murder of her father in 1875 by setting out in Choctaw Country with a US Marshall, Rooster Cogburn. The book was made famous by a John Wayne movie in the late 1960s. I am so captivated by the narrator's voice. As Mattie looks back on this event from earlier life, one is instantly transported back to a by-gone era in America. That is what I love about the second quote.

Posted by Anne@HeadFullofBooks at 5:51 PM