Here We Are: Feminism for the Real World 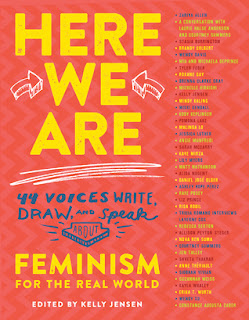 Here We Are: 44 Voices Right, Draw, and Speak About Feminism for the Real World edited by Kelly Jensen is a new book in my library. It is a fairly slim volume of essays written by a variety of authors on the topic of feminism. It is one of those books that is important and should be widely read but will likely languish on the shelves ignored by students who would benefit greatly from reading it.

Feminism is one of those terms or concepts which is hard to define. Here is what the dictionary says about the term:

Each person who contributes to this book elaborates about some aspect of feminism or how they grew into their current beliefs on the topic. Some of the authors include reading and listening lists. Others, the illustrators among them, tell their story with pictures or comics. It really is a delightful collection.

My favorite essay was actually written by a male author, Daniel Jose Older, "Many Stories, Many Roads." Most of the authors are female and I was a little worried that without a male perspective this book would not be as valid. He says he thinks the feminism has suffered from "gate-keeping and line drawing"--- people oppressing others, "acting like overzealous bouncers, keeping so many dancers out of that big beautiful room" (186). To allow as many people into the big room, he says, requires that we look at "our patriarchal gender norms, the rules that tell us how to fit into pre-assigned boxes labeled 'men' and 'woman,' having nothing to do with with and everything to do with power" (189).

Included in the collection is the poem "Somewhere in Amercia" by Zariya Allen. Watch the video below where Zariya and her friends perform it. It is a powerful message of what we teach our children about priorities. Catching in the Rye is more dangerous than a gun because it uses a swear word. Maya Angelou's I Know Why the Caged Bird Sings isn't taught because of rape. "We are taught that just because something happens doesn't mean you are to talk about it" (89). Schools give out awards for best attendance but don't reward students who work the late shift at the fast food restaurant just to help the family make ends meet. Instead of leaning math and social studies in school, students learn to keep quiet, keep their head down, keep eyes on their papers. The poem  really shows a heartbreaking reality to our lives in America.  Watch the video.


Why should students read Here We Are? Because everyone needs to know they are included in the "big room" as Older calls it. Students need to know that they are not alone, that others have also struggled with the ugly aspects of our society/school culture. If a person is a feminist, they are also pro-people, all people. I recommend that everyone read this book, or at least several of the essays. It is time we start shifting our definitions of what it means to be a feminist.