Classics Club Spin Book---Review of Tales of the South Pacific 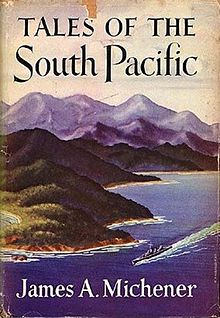 Another Classics Club Spin book completed! This one was Tales of the South Pacific by James Michener.

James Michener wrote Tales of the South Pacific after his experiences in World War II in the Pacific theater. It was published in 1947 and won the 1948 Pulitzer Prize for literature. Michener was 40 years old when this book, his first, was published and he never looked back, eventually publishing over 25 books. This book was short (384 pages) compared to his other books, many weighing in at over 1000 pages. This book was adapted as a Broadway musical, South Pacific, in 1949 and in 1958 it was made into a movie.

Michener was called to active duty during World War II in the US Navy and spent the war as a historian, eventually making trips all over the South Pacific, and visiting many islands. He thinks one of the reasons he was allowed to move around so much was because his base commanders mistakenly thought he was related to Admiral Marc Mitscher. Later in his life Michener said this about his war time experiences,


"Many of the fondest memories of my travels stem back to my years of military service in the New Hebrides -- (now Vanuatu) -- during the Pacific War years of the early 1940s...While those beautiful islands have changed much with progress in the ensuing years, I know from subsequent visits that the friendliness of the peoples, their infectious smiles and their open-heartedness will remain forever one of life's treasures."

Tales of the South Pacific is a collection of short stories with an unnamed narrator who tells the stories collected from many of Michener's experiences and who plays witness to the happenings on many islands. Many people, reflecting back on the quality of this book compared to his subsequent works, think that he won the Pulitzer Prize for this book because of the post-war sentiment and patriotism, not because the books was a shining example of excellent writing. Most of the stories focused on how the American soldiers, sailors, and airmen spent their time when they weren't making war. Many of the characters in the stories did not have exemplary behaviors, several displaying blatant racism, and while others mentioned rape as if it were just an expected behavior. Few of the stories dealt with actual battles but the ones that did were my favorite. It is horrifying to think how many lives were lost over those little chucks of land in the Pacific.

One takeaway from Tales of the South Pacific was how much time was spent waiting by most of the military personnel. Waiting. Waiting. Waiting. I had no idea how much time was spent waiting for action. Soldiers asked to be transferred north so they could participate in some battle. Fighting was preferable to the boredom of waiting. In the story, "Dry Rot", one character begged to be reassigned and his commanding officer reminded him that somebody had to wait around on the island to gas up the planes. Why not him? In another story, "Fo' Dolla" an officer gets involved with a Tonkinese girl and ends up becoming completely obsessed with her, even though he would not marry her because he views her as below him racially. He had way too much time on his hands to get so involved with a local girl. I am fairly sure that Michener himself must have experienced the endless waiting, waiting, waiting, since it was such a prominent theme in most of the stories.

The quote above is the opening line of the first story in the Tales of the South Pacific. The reason the narrator can't tell you about the loveliness and the waiting is because of the second paragraph, where we learn  "about the old Tonkinese woman who used to sell human heads." There were lots of surprising tidbits like this thrown into each story which kept me going and made the reading experience passable.

If I had to grade the book and my reading experience I'd give it a "C" and it is unlikely I will ever recommend that anyone read this book in the future. There were just too many problems with it that can't be overlooked.

Now I am off to see if I can a copy of the movie South Pacific to see how closely it follows the book. I watched it years ago and can't remember.

Here is one of the famous numbers from the South Pacific musical, "Bali Hai":


-Anne
Posted by Anne@HeadFullofBooks at 12:58 PM