September 11th memory: On September 11, 2001 as the events in NYC were unfolding to the horror of a nation and world I was blithely asleep and getting ready for work. I didn't know about the terrorist attacks until I got to work when someone asked me how I was doing and I didn't know what she was talking about.  As the events of day unfolded we all sat transfixed on our televisions, even as classrooms of students came and went throughout the day. One students, a girl, asked if we could please just do our lesson which I had completely abandoned, because she was tired of being sad and just wanted to get on with things. Ah to be young and self-absorbed. Little did we know how much the events of that day, fifteen years ago, would transform all of our lives.

Weather: It has ended up being a sunny day but it started off cold and overcast.

Ugh: The beginning of school is always tough for us in the school library because we have to work so hard to get out the textbooks to all students in the different classes but this year we've also had to deal with the iPads for every student. It has ended up being a bigger problem than anyone imaged. On Friday I was still at work at 6 PM because I didn't want to come back on Monday to a mess. It has been a stressful and tiring start to a new school year. 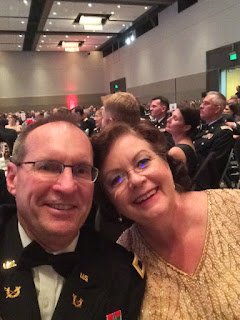 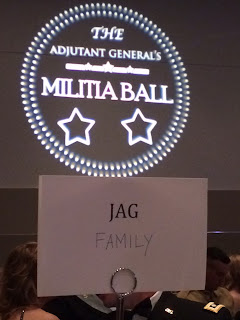 Militia Ball: Don and I went to the Militia Ball last night for the Washington National Guard. As much as I complain about doing this type of thing, We sat at a table with only JAG officers and their wives, so we didn't have to pretend to be hyper-military folks, which always drives me crazy. I actually had fun last night, especially once the dancing started.  The Guard has a rock band that played a lot of old classics that are good for dancing (and singing along to) but the band does not look like a normal rock band. See photo below. The band members just look like normal soldiers. Ha!

Books completed:
Currently reading:
Up next: I will have to do a little "shopping" this afternoon to decide what audiobook I want to listen to next and I currently have six library books checked out. Which one should I read first?
Posted by Anne@HeadFullofBooks at 4:36 PM