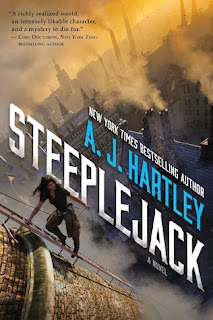 In the opening scenes of Steeplejack by A.J. Hartley readers discover the book involves both a mystery and a murder. The mystery? Who stole the huge and valuable luxorite stone from the Beacon which lights up the city of Bar-Selehm? The murder? Who killed the young steeplejack, Berrit, a Lani boy, found dead at the bottom of a spire with injuries suggesting he was dead before he fell? Everyone seems to care about the missing Beacon luxorite, yet only Anglet Sutonga seems to care about what happened to young Berrit and why. As Anglet pokes around she soon finds her own life in peril as she discovers Berrit's death is related to a conspiracy for power and wealth. If the players win, the whole country will be thrown into war. Anglet will do her best to discover who these players are before it is too late for everyone.

Even as I write this summary I am reminded of the complicated plot of Steeplejack. Like all good mysteries and detective stories there are many plot twists, turns, dead-ends, and surprises. The setting is imaginary but appears to be based on South Africa, where the black majority are/were ruled by the white minority and the brown folks were brought in from afar to be the merchant-class. The blurb on the book says it is set in the 19th century, and it does have a little of the steam punk vibe to it. Black tribesmen and wild animals also factored into the plot. This combination of fantasy and realism made the setting seem very exotic. There are lots of characters in Steeplejack and it is hard to keep track of everyone in the beginning because of unusual names.

That said, I really liked the book. In fact, as I became immersed in the plot with its exotic setting and plethora of characters I actually sighed to myself. Finally, I thought, a Young Adult mystery that is worthy to be called a Mystery, not some watered down, simplistic drivel that passes for mysteries in the YA world.

The author, AJ Hartley, is (or was) a professor of Shakespeare at the University of North Carolina and Steeplejack has been nominated for the Dragon Award by Dragon Con for the best Young Adult Fantasy novels of the past year. On the same list is Terry Pratchett's last novel, The Shepherd's Crown, which I love, love, love. So now you know what kind of company Steeplejack keeps. (Though I have never actually heard of the Dragon Award, so as far as I know it may be a made-up thing by a fantasy fan. Who knows? It still sounds good.)

Steeplejack is the first book in a series called Alternative Detective series. Though, in case you are worried, the mystery in this book wraps up nicely so the the book could be a stand alone. Should the Printz committee take a look at Steeplejack? You bet. I am sure that this book will be given serious consideration for the coveted prize.

Source: Print book checked out from the Pierce County Library.

Posted by Anne@HeadFullofBooks at 9:15 AM