I'm trying to be hip but doing a bad job of it. I'm entering the discussion on When We Was Fierce. 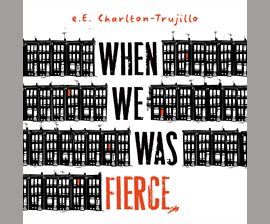 During the early part of the summer When We Was Fierce by e. E. Charlton-Trujillo came to my attention.  It had wonderful, starred reviews by the likes of Kirkus Reviews, Booklist, and Publisher's Weekly. I had to read it. Heck, I might be an old(ish), white librarian-lady but I like to read what the kids are reading and what I think they should be reading. So a book set in the Hood which gives voice to the African-American experience is a must read for me and possibly for my students. With reviews that say this kind of praise, I was especially excited: “... a heartbreaking and powerful modern American story,” (Publisher's Weekly) and  “…a compassionate, forceful look at the heartbreak and choices these black boys and men face” (Kirkus Reviews). With reviews like this you can see why I added it to my book order and readied for its publication date in early August.

One day in early August I was on Amazon.com looking at the book, considering preordering the audiobook and the next day it was unavailable. What happened? I waited, thinking the publisher had just ran out of books. I couldn't get the print edition but the public library had a copy of the e-audiobook which I checked out over the weekend. I started listening to it yesterday. Right on, I'm hip. I don't understand half of the words in context, but it is a very hip book. Isn't it?

Today I once again visited Amazon.com to check the status so I could order a book for my library yet the book was still unavailable. I obviously needed to investigate further. Why is the book still not available? What I found out was surprising. Lauren Barack, writing for School Library Journal on August 12th, said


Amid increasing controversy around author e.E. Charlton-Trujillo’s most recent book, When We Was Fierce, and her use of a made-up dialect along with what some deem as stereotypical characters, Candlewick Press has postponed publication of the book./

Oh, no wonder I couldn't get the book. The publisher postponed publication.


In the case of When We Was Fierce, some educators, librarians, and authors found that sensitivity lacking. Jennifer Baker posted a guest review of a pre-publication copy of When We Was Fierce on the blog,Crazy QuiltEdi, calling the title “off-the-mark” with narration that was “deeply insensitive,” she writes. She joins the ranks of educators and librarians, including K.T. Horning and Edi Campbell, who have also posted on why they have found the book problematic./

It seems that the made-up dialect was a problem for other folks, too. I just thought I wasn't with-it enough to understand the words in context, though I can understand the gist of the story.


Baker herself hopes to see more stories told from diverse viewpoints. But to Baker, Charlton-Trujillo’s novel was “glaringly offensive,” she says. “When We Was Fierce was highly problematic from the inaccuracies to this very arm’s length approach, [and] the stereotyping of black characters specifically,” she says. “The made up dialect the author used was so egregious, it is horrible” (SLJ).

Oh wow. Here I was trying to like the book and to understand the words in context, thinking I'd be hip if I pulled it off, while other, more knowledgeable readers had grave and valid concerns about the book which I missed. Later in the article Jennifer Baker says that she thinks that publishers are and should increase the diversity in the books they publish but they need to make sure they are "respectful, responsible, and accurate." Apparently When We Was Fierce did not pass on those three points.

The story-line is about a fifteen year old boy T (Theodore) who witnesses the murder of his neighbor Ricky Ricky, a disabled boy. When he went to help Ricky Ricky, T was attacked and nearly killed, too. These two related events send the community into a tailspin and T and his friends are afraid for their own lives. They might even need to move out of state. The book is written in verse, though I can't really tell this detail in the audio version I am listening to which is read expertly by Rodney Gardiner. One point I have repeatedly been struck by, how hard it is to parent children in slums. T is constantly being pressured to join a gang and his mother tries equally hard to keep him away from their negative influences.

If you look at the reviews on Goodreads for When We Was Fierce you'll likely be struck by how opposite many reviewers feel about this book.  There are either 1 star reviews or 5 star reviews, nothing in between. At this point the publisher is listening to the one-star reviewers who are speaking louder.  I am not sure if the book will be reworked and published at a later date. I kind of doubt it. So if you want to read it you will need to get your hands on a ARC version, or check your library audiobook listings. It might be there like it is in my library (available on Hoopla.)

Even though it might not be published I am still counting it as one of  the potential Printz Award books for 2016. I would be highly skeptical this book would get any kind of award, not with this much controversy surrounding it.

Posted by Anne@HeadFullofBooks at 5:17 PM