The hunt for the 2017 Printz Award contenders 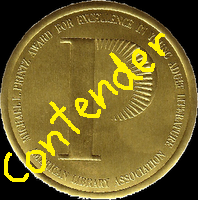 So far this year I have read seven books which qualify as potential Printz award books. By qualify I mean that the books fulfill the requirements to be considered because they were published in the U.S. in 2016; they fall into the Young Adult classification of literature; and, *this is important to me, have all earned at least three starred reviews. There are currently around 30 YA titles which have earned three or more starred reviews. I hope to read them all before the end of the year. Of the seven books I've read that fulfill these qualifications, no winner has emerged yet, though many were very good. (*Earning starred reviews from literary review journals is NOT a requirement for Printz consideration, I just have to start and end somewhere. If I attempted to read all YA book published a year it would be hundreds of books, an undoable task.)

Having fallen way behind on my book reviews this Spring, I've only reviewed one of the seven books, my goal is to remedy this situation this week. But in the meantime, these are the titles and a brief summary of the books.

Burn Baby Burn by Meg Medina---set in NYC in 1977 the summer when disco was king but the city was under siege of Son-of-Sam, arsonists, and a heat wave which caused brownouts, looting, and crime. I was in college when disco hit the scenes so I enjoyed the blast from the past and looked for authentic 1970s cultural references. I haven't had any students read this book so don't know how much it would appeal to them, though I know the Printz Award is not based on popularity. My review here. (4 starred reviews)

The Mystery of Hollow Places by Rebecca Podos---a girl's mother abandons her when she is very young. Her father, who clearly has mental health issues, never seems to recover from the abandonment. When he also goes missing, the girl is sure he is looking for her mom and it is her job to follow the clues to find them both. I listened to this audiobook on my staycation which my husband as he and I drove around Western Washington looking for weird and quirky landmarks. The landmarks we found were much more exciting than the mystery in this book. (3 starred reviews)

The Steep and Thorny Way by Cat Winters---set in Southern Oregon in the 1930s when and where, oddly, the KKK was active. The main character is half African American. Her father was killed for the color of his skin. Hanalee has to make alliances to get to the bottom of what is happening in her community. These alliances put her at odds with her family. The supernatural parts of this book make the story seem less credible but I did enjoy it. (3 starred reviews)

The Memory of Light by Francisco X. Stork---Vicky attempts suicide and ends up in the hospital on the Psych Ward. While there she meets other troubled teens and starts to understand herself and her pain and despair came from. I've been a Stork fan since his book Marcelo in the Real World was published. This book is very credible and, I think, helpful in terms of the treatment of depression and suicide ideation. (4 starred reviews)

Golden Boys by Sonya Harnett---a new family moves into a neighborhood with two school-aged boys. These boys seem to have every toy any boy could want and they are willing to share them with their new friends. The only problem is their father seems far too interested in the neighbor boys than is healthy. Honestly this book was mesmerizing, but mesmerizing in a creepy way like reading Lolita. (3 starred reviews)

Anna and the Swallow Man by Gavriel Savit---set in 1939 Poland just as WWII breaks out, Ann's father, a professor is taken by the Nazi's and Anna is forced to fed for herself. She links up with a man she calls the Swallow Man and the two of them walk and hid and survive on their own for years. The book is less about the war and more about the relationship of the unlikely pair. (3 starred reviews)

The Raven King by Maggie Stiefvater---this is the fourth and final book in the Ravel Cycle series, which I love. It is a wonderful and complex book with plots twists and new characters. Of the lot, this one is my favorite but I doubt this will be seriously considered by the Printz Committee because of it is part of a series. I hope I'm wrong. (4 starred reviews)

If you want to immerse yourself, as I have, in the world of starred book reviews, please visit Jen J.s Blog. She is keeping close tabs on the books earning to most stars in the YA world. Visit her blog by following the link.

Posted by Anne@HeadFullofBooks at 10:29 AM