Not a zealot about Zealot 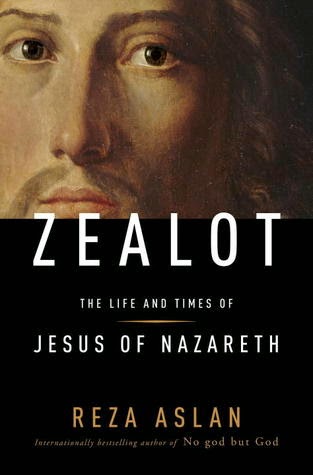 Zealot: the Life and Times of Jesus of Nazareth by Reza Aslan has certainly been a lightning rod book drawing all kinds of publicity, both good and bad.

I first heard about the book Zealot after a Fox News interview of Aslan which has since been called "The Worst Interview Ever." The interviewer grills Aslan, who is a Muslim, and asks him what gives him the right as a Muslim to write a book about Jesus. Aslan is calm and cool and the interviewer looks unintelligent and biased. Take a look at the highlights of the interview in the YouTube video below.


In the interview Aslan claims and reiterates often that he is a scholar who has four degrees in ancient history and Greek and he just happens to be a Muslim. When I first saw the bad interview and the subsequent backlash, I decided to read the book to learn more about Jesus and the world in which he lived. And, more importantly, to see what all the fuss was about.

Well, my reaction to the book surprised me. It really bothered me. Aslan basically tore apart many tenets of the faith such as the virgin birth, the resurrection, even questioning whether Jesus could read. He defined what he meant by calling Jesus a zealot and admitted that he was a good person/prophet but doesn't believe he is the Son of God. As I listened to the audiobook I found myself wanting to plug my ears and sing so that I couldn't hear it anymore. Real mature reaction, huh?

As soon as I finished the book I raced to the Internet to find some review of the book by people who know more than me about church history. The review by Dale Martin in the New York Times was the most balanced that I found. Dale Martin, a professor of religious studies at Yale University, points out some inconsistencies in Mr. Aslan's book. He found some good points, too.


A real strength of the book is that it provides an introduction to first-century Palestine, including economics, politics and religion. Mr. Aslan uses previous scholarship to describe the precarious existence of Jewish peasants and the lower classes, and how the Romans and the Jewish upper class exploited the land and the people. He explains not just the religious but also the economic significance of the Temple, and therefore the power of the priestly class controlling it. -NYT, Dale Martin, August 5, 2013

I agree with him. The historical information in the book was fascinating and I learned a lot about the world in Jesus' day under Roman rule. Aslan is also a very strong writer. Zealot shares some of the best traits of popular writing on scholarly subjects: it moves at a good pace; it explains complicated issues as simply as possible; it even provides notes for checking its claims" (NYT).

At the end of his review Martin says that Reza Aslan currently teaches creative writing as his profession and is not teaching on anything related to Christianity or Judaism. Whoa. What did he say? I just watched the video where Aslan kept telling the Fox host that he was a scholar with four degrees. After a little more digging I found that Reza Aslan's undergraduate degree is in Religious Studies, a Master of Theological Studies, and Ph.D. in Sociology of Religions, and he later added a Master of Fine Arts in Creative Writing. He can read a bit of Greek but isn't fluent. In fact, Craig Evans writing for Christianity Today says "Zealot often reads more like a novel than a work of historical analysis." Which makes sense considering what Mr. Aslan teaches.

I became very unsettled after reading Zealot. I didn't want to discuss this book with just anyone, I wanted to discuss it with my pastor or my dad (who is a pastor!) I wanted to talk to someone who had been to seminary. When I mentioned this to a friend she reminded me that Christians take many aspects of our religion on faith. Faith is defined as a "strong belief in God or in the doctrines of a religion, based on spiritual apprehension rather than proof." I didn't need to let the information in the book cause me stress because so many of our beliefs had to be accepted in faith.

The book is certainly provocative and made me think. I was interested in the cultural and historical information within it but was uncomfortable with the information that seemed to be intended to disassemble my faith. For these reasons I will only recommend this book with deep reservations. Let's put it this way, I am not a zealot about Zealot.