Laurie Halse Anderson does not shy away from tough topics 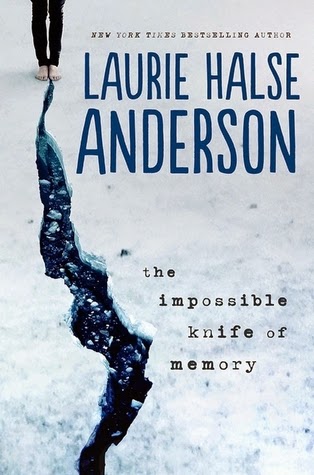 Laurie Halse Anderson must be a fairly serious person because her books always seem to tackle tough topics. None of that light, fluffy YA stuff from Anderson. She believes in speaking directly to teens, "addressing their real fears, concerns, and frustrations." Her first book Speak (1999) dealt with the oft taboo subject of date rape; Catalyst (2002) addresses school cliques and rejection. In Twisted (2007) Anderson grapples with what it means to be a man in todays world, while Wintergirls (2009) gives the reader a startling look at the ravages of anorexia and bulimia. In her latest book, The Impossible Knife of Memory (2014), Anderson confronts PTSD head on.


For the past five years, Hayley Kincain and her father, Andy, have been on the road, trying to outrun the memories that haunt them both. They moved back to Andy's hometown to try a "normal" life, but the horrors he saw in the war threaten to destroy their lives. Hayley watches, helpless, as her father turns to drugs and alcohol to silence his demons. How do you keep your father alive when death is stalking him? What are you supposed to do when your parent stops acting like an adult? And what happens if a sweet guy who can make you laugh barges his way into your world and for the first time, you find yourself thinking about the future?- Book flap

Hayley, a high school senior, is trying school for the first time in over five years. She is behind her classmates in math but way ahead of them in Social Studies. She doesn't want to play the school game which involves going along with teachers even if she knows they are wrong, or attending classes that seem irrelevant. Every moment at school she is distracted worrying about her father and what he might be doing or not doing. She makes a few friends including Finn, a handsome young man who seems almost too good to be real, but Hayley has a hard time being a normal teen when things at home are in such chaos.

Review: I really appreciated Anderson's handling of the seriousness of untreated PTSD and how it affects all members of a family. I wanted to throttle her father half the time for what he was putting Hayley through but then it was obvious that he was mentally ill and not in full control of his actions and emotions. Hayley seemed so mature and responsible some moments and so immature and impulsive the next. I think that is very realistic.  Kids who grow up in homes plagued by mental illness are asked to shoulder such burdens it is hard to imagine how difficult their lives must be at times. Finn, as a counterpoint to Hayley, was also dealing with dysfunction in his family and his approaches to the problems were much more healthy. He was an excellent role model for Hayley if only she could have stopped worrying about her father long enough to take a look.

As usual when I read YA literature I find myself getting really frustrated by the adults in the book that should know how to help and do the right thing, but don't. There were plenty of adults who could have come alongside Hayley at critical junctures but they missed chances to make a differences when it counted. The seriousness of the book was not offset by many/any light-hearted moments or humor. This was one very serious book from beginning to end.

I listened to the audiobook version of The Impossible Knife of Memory read by Julia Whelan and Luke Daniels. Daniels handled the few chapters where we see into Andy's flashback memories. Whelan read the rest of the book doing really well on the female parts but not so good on male voices. By the time I reached disc 6 of 8, I decided that I needed to read the book faster than the audiobook allowed so I picked up the book from my school library and finished the book myself.

Because of the seriousness of topic of The Impossible Knife of Memory the book will have limited appeal to the casual teen reader but will resonate with students who are grappling with similar topics at home or don't mind digging in deep with an emotional topic.

The Impossible Knife of Memory
by Laurie Halse Anderson
Brilliance Audio, 2014.
Checked out from the public library.