Review: Lord of Opium by Nancy Farmer---The Good and the Bad 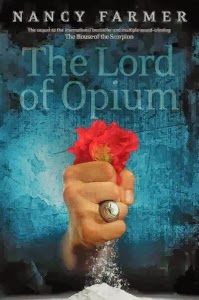 The Lord of Opium by Nancy Farmer is the sequel to the wildly popular The House of the Scorpion which was first published in 2002. It continues the story, after El Patron's death, of Matteo, his clone, who now ascends to be the drug lord of the kingdom of Opium.

Good: The story picks up right after the ending of the first book with very little time spent rehashing the details of that book.

Bad: I read HoS over ten years ago and I should have reread it before launching into LoO. I actually needed more rehashing than I got as I'd forgotten great swatches of the storyline.

Good: We meet back up with beloved characters like Matteo, Maria, Celia.

Bad: Similar to HoS in LoO there are LOTS of characters, so many that it is sometimes hard to keep track of them and many of the characters seem flat and one-dimensional. Maria, a favorite from HoS, makes only occasional appearances until she jumps through the wormhole. Once in Opium her presence doesn't really add anything to the storyline.

Good: Matteo, as the new El Patron, has a lot to do and to worry about. Interesting questions of ethics arise as he considers how he wants to live his life and on what priorities he wants to focus. His commitment to freeing the eejits from mental enslavement is a worthy project and so is his interest in Waitress.

Bad: Matteo is only fourteen. It is hard to believe that he would be prepared to step into the shoes of the old El Patron and manage a whole country with only the help of one man, Cienfuego, who is a thuggish but ultimately likable character. I also felt like there were too many things for me, the reader, to stay focused on. Matt was concerned about the eejits, the safety of Opium, the Space Station, the biosphere, a party for his friends, the Lost Boys, El Patron's voice in his head, etc.  The list goes on.  Jen over at Reads for Keeps made a diagram showing the things that Matt juggles which explains why it is difficult for the reader to stay focused.  Hop on over to her review to take a look.

Good: The end of the book contains lots of action and wraps things up nicely.

Bad: The majority of the book contains little action. The pacing of most of the book is very slow (read: boring.) When Matt does encounter his first opportunity to be brave and to fight back he is knocked out and wakes up in a hospital. It reminded me of what would happen to Katniss during the periods of high-action in The Mockingjay. Everything wraps up so nice and neatly it made me wonder if Farmer was concerned at hurting reader's feelings if she killed off a beloved character or something.

Point: HoS won three prestigious award: National Book Award, Newbery Honor, and Printz Honor. Since the Newbery Award is given out to more middle grade books and the Printz Award to more high school level books the fact that it won both tells me that the award committee thought it fell somewhere in between.
With the slower pacing and the non-dramatic action I felt that LoO was more geared toward younger readers. I suspect that high school students will agree with me that the book is too slow and bit boring.

Good: Farmer does a fabulous job with world-building. Everything she describes is so vivid and real.

Audiobook: My husband and I listened to half of LoO in audiobook format. Raul Espanza was a perfect choice as reader as his Spanish words just rolled off his tongue. I would have struggled reading them for myself. At the halfway point my husband decided that he had enough and stopped listening. It was too slow for him.

My evaluation: I was prepared to say that I didn't like the book for the above reasons. However, I didn't write my review immediately. As the days passed I realized that I kept thinking about the book, mostly about the world that Farmer created, and it came to me that this is a book and storyline that needs to percolate around in the mind to be fully appreciated. I also would recommend that you reread The House of the Scorpion before launching into The Lord of Opium to get the full benefit of the setting and the characters. Altogether I would give this book just an average rating, not good or bad. I would also recommend it for middle grade reader, 5th-8th grades, the action isn't exciting enough to hold the attention of older readers.

Disclaimer: I checked out the audiobook from my public library.

Posted by Anne@HeadFullofBooks at 8:50 AM