Review: the Coldest Girl in Coldtown by Holly Black 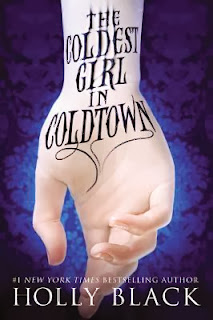 Ready to give the whole vampire paranormal romance genre the heave-ho? I'd wait a minute and read this book before you do. The Coldest Girl in Coldtown by Holly Black is like Twilight on steroids with strong writing, character development, and plotting.

Coldtowns started springing up a few years ago when the equilibrium that had kept vampires in check went awry. When a vampire bites a human they become infected as with a horrible disease and all this person wants to do is to drink human blood.  If they do they will die and return as a vampire. This new vampire then will seek out more blood and soon great swatches of society are being turned in to vampires.Communities with high vampirism rates were forced to build walled, secured cities to keep the rest of society safe from these vampires and from the newly bitten who were likely to turn.  Once a person entered a Coldtown it was very unlikely that they would ever leave. So when Tana awakens one morning to find all of her partying friends dead except her x-boyfriend Aiden.  She knows that they have to go to Coldtown to keep their families safe from what they will likely become since both of them have been bitten or scratched by vampires. In the process they meet up with an unassuming vampire, Gavriel, who wants to go to Coldtown with them. Aiden wants to drink human blood so he can become a vampire, Tana wants to go to safe room where she can sweat out the poison so she can return to her previous life.  But everything isn't as it seems in Coldtown. Dangers confront them at every turn.

Part thriller, part paranormal romance I predict that this book will appeal to a wide variety of readers. Don't just take my word for it. Here is what other reviewers had to say about Holly Black and The Coldest Girl in Coldtown:

* "Replete with grisly violence, an intriguingly complex take on the mechanics of vampirism, and well-developed and memorable characters, this superior, dread-soaked tale will satisfy vampire addicts of all ages." -Publishers Weekly, starred review

* "You may be ready to put a stake in vampire lit, but read this first: It's dark and dangerous, bloody and brilliant."  -Kirkus, starred review

* "With rapid-fire dialogue, lavish details, and a wildly imagined world, this will enthrall Black's fans from start to finish..."  -Booklist, starred review

"Black's compelling prose, descriptive yet direct, conjures a modern Gothic world populated by cruel immortals, desperate humans offering themselves as food, and a few hardscrabble survivors. Tana is a winning heroine, by turns staking killer vampires and giving herself over to Gavriel's deep, smoldering kisses."
-The Horn Book

This is a 2014 Mock Printz selection for the BSD. I listened to the audiobook version of  The Coldest Girl in Coldtown checked out from the public library. Christine Lakin did an excellent job as the reader of this exciting book and I recommend it in this format.

Posted by Anne@HeadFullofBooks at 1:22 PM