Retrospective Wednesday is a feature at My Head is Full of Books designed to give bloggers a chance to highlight a book that was published in previous years, in the hope that it will cause others to go back and read it. The featured book must have been published one or more years ago. 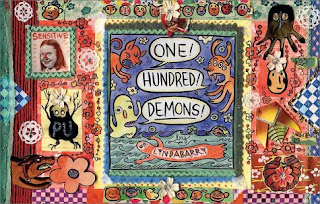 One! Hundred! Demons! by Lynda Barry is the very first "autobiofictionalography" reviewed on this blog. In the first view pages of this graphic novel/biography we learn that Lynda Barry the cartoonist/artist/author decided that she was going to face her demons after reading that Buddism teaches that each person must face 100 demons in their lifetime. Here we are treated to nearly twenty semi-autobiographical comic strip stories set up in a scrapbook format with the demons identified with one word: Dancing, Hot dogs, Hate, San Francisco, etc.

"With fantastic powers of memory (or perhaps imagination) Barry recreates the near-hallucinatory, intensely observed world of childhood," said Andrew Arnold of Time Entertainment in 2002 when the book was first published. As Lynda faces her demons we are led to believe that all was not well in her life at home, school, or in the lower-class neighborhood where she lived. But then again, she was facing her demons, so one can't really go bragging about the good stuff at the same time. Lynda's mother does not come out well in these sketches.  She was angry and abusive, making me marvel that Lynda made it out of childhood in one piece. And, in case you are wondering, I understand that she has been a very popular cartoonist and now leads workshops helping authors find the creativity and inspiration to write. "Fictional or not Barry's demons have a kind of authenticity that makes them totally real" (Arnold.)

There is a lot to relate to in the demon sketches, maybe not the angry parent part but sketches that express the awkwardness of the teenage years, aching over dumb decisions, wishing that adults would talk to us about negative emotions as well as positive ones, and so forth. I was even tempted to try my hand at a "demon journal" and then decided that, at this time, it is best to let "dead dogs lie."

Look for this treasure at your public or school library. It is a delight.

Posted by Anne@HeadFullofBooks at 8:15 PM