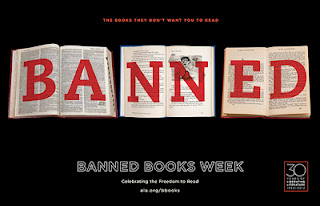 Banned Books Week 2012 began this past week-end.  I had such a crazy week-end I didn't get my post ready to participate in the Banned Books Week Challenge and Giveaway. Sorry. Even though I am no longer on the official list I promise to blog about censorship, 1st Amendment, and/or book banning every day this week.

Start the week by listening to this brief introduction to the 30th anniversary for Banned Books Week by Bill Moyers. Bill talks about the impact libraries have had on his youth, his dismay over book challenges in modern times, and why censorship is the biggest enemy of truth.

"It's strange because sometimes, I read a book, and I think I am the people in the book."- The Perks of Being a Wallflower by Stephen Chbosky

What is your favorite banned book?  My long time favorite is To Kill a Mockingbird, but my new favorite is Hunger Games.

Posted by Anne@HeadFullofBooks at 6:54 PM