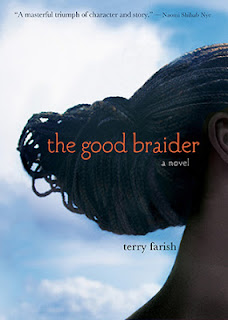 Written in free verse The Good Braider is the story of Viola and her family's journey from war-torn Sudan, through Cairo, finally ending up in the United States. How does a girl who has escaped the horrors of war cope with the memories of a childhood ravaged? How does a girl who grew up in a small, close-knit town in Southern Sudan suddenly deal with the American culture so different from her own? "...the strange world of America a world where a girl can wear a short skirt, get a tattoo or even date a boy; a world that puts her into sharp conflict with her traditional mother who, like Viola, is struggling to braid together the strands of a displaced life." -Goodreads

As happens so often fiction can teach without a lecture, can illuminate without pain. Though I have been aware of the atrocities occurring in Sudan from their civil war, I really hadn't given much thought to its causes and to the realities of the war on the average person. Shame on me. The Good Braider by Terry Farish brought this war into sharp focus for me. Rape, displacement, death, loss of culture all are tragic results of war. But not being able to plant crops? I had never realized that is also a result of such conflict.  And without crops what do the people eat? Without preaching, the reader also learns that this civil war, as is the case so often, is about religion. Those in North Sudan, mostly Muslim, fighting with those of Southern Sudan who are mostly Christians. Why are these two disparate halves part of the same country? No doubt it has its roots in European Colonialism.

The war in Sudan is only half the book, however. The other half beautifully expresses the conflict for immigrants to America. How can one assimilate into the culture without losing oneself? Conflicts between Viola and her mother demonstrate this point. As Viola goes to school and learns to read and write, she also becomes more Americanized. Her mother who doesn't have the same opportunities for education is unwilling to accept these changes.

I am very impressed by the skill with which Terry Farish has braided together the pieces of a life into a thoughtful story while gently educating the reader. Well done.

*This book is a Mock Printz selection.

Posted by Anne@HeadFullofBooks at 9:49 AM