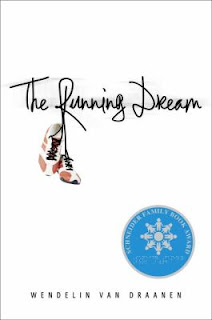 The Running Dream by Wendelin Van Draanen is about a girl, Jessica, who is a runner.  She loves running. Her identity is wrapped up in running. When a tragic accident occurs just hours after she sets a school record in the 400 meter race and her leg is amputated just below the knee she thinks her life is over, or at least not worth living. But with the help of a really skilled doctor, good friends, and devoted teammates, Jessica is able to pull her life together and she actually finds a new way to run and a new appreciation for people living with disabilities.

I really, really like The Running Dream.  I expected it to be good since it won the Schneider Family Book Award given each year to a YA book that does an exemplary job describing life with a disability, but I didn't think it would be good good.  It is!

What was it that I liked so much?  First, the book does do an exemplary job at describing life with a disability, in this case being a single amputee.  As Jessica was going through the process of being fitted for her prosthesis I could picture what she was going through and what the doctor was doing.  The writing was clear, precise, and descriptive. I even thought to myself that this would be an excellent book to put in the hands of soldiers returning from Afghanistan/Iraq who have lost a limb because the writing is so clear and helpful.

Secondly, our main character learns so much about herself through her disability.  She makes a new friend, Rosa, that she never would have met before the accident.  Rosa was born with Cerebral Palsy and is confined to a wheelchair.  Rosa is a math whiz but longs for the freedom of running.  She is wise beyond her 15 years and it is her encouragement that helps Jessica see that disabilities need not be limitations. In addition, Jessica's team steps up to not only inspire her but to actually help Jessica toward her goal of getting a running prosthesis. Everything is not always rosy for Jessica, but things do get better.  Here is a favorite quote about this:


"It's still disturbing how fast weeds take root in my garden of worthiness." (p.314)


This book REALLY inspired me.  In fact, I have used a few of the examples within the book with my advisees this week as they struggle to put all the pieces together at the end of their senior year in high school in order to graduate. I doubt that the book will every be considered "popular" in the library but I will know where it is and will be able to get it into the hands of those students who really need it.

BTW- I listened to this book on audiobooks.  I want to give Laura Flanagan, the narrator, a shout-out! She did an amazing job.  I thought she especially did a good job with Rosa's voice.  Since Rosa has cerebral palsy her voice or diction are not always super clear and that is part of the storyline.  Ms. Flanagan got her voice spot on!

Posted by Anne@HeadFullofBooks at 12:06 PM