A Time of Miracles by Anne-Laure Bondoux 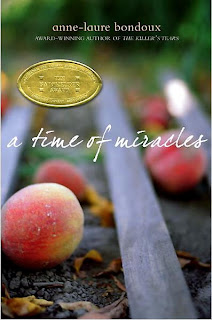 The Mildred H. Batchelder Book Award  goes to the best YA fiction translated into English from another language.  The 2011 winner of this award is A Time of Miracles by Anne-Laure Bondoux, translated from French by Y. Maudet.

In this extremely moving and exquisitely crafted story we are introduced to two refugees, Koumail and his guardian Gloria, who flee from war-torn the Caucasus area of the country of Georgia as the Soviet Union falls apart. Their destination is France, Koumail's birthplace. For five years the duo travel by foot mainly, with little more than the clothes on their back to reach their destination. Along the way we are treated to the delights of Gloria's story-telling and her admonishments to never give in to despair. But there is so much to despair over...little or no food, freezing temperature, disease, and separation. Somehow the two survive clinging to each other in love and with a great deal of hope.

This is a charming story with many parts written so beautifully that I felt like my soul was nourished just by reading it. I did find the geography of the story quite confusing though, as I'm no scholar of the land sandwiched between the Caspian and the Black Seas.  It wasn't until I started writing this review that I took a look at the front of the book again and was astonished to see three maps of Koumail's journey.  Silly me.  They really would have helped as I tried to imagine the trip. I will certainly point them out to my patrons when they check-out the book, as I hope they will.

'Hush, hush! I never lie, Mr. Blaise. I may embellish things a little from time to time, that's all.' Gloria strokes my hair. 'There's nothing wrong with making up stories to make life more bearable.'

Among all the things she gave me, I know there is a foolproof remedy against despair: hope. So as my tears run down my cheeks, I promise her that I will live my life the way she taught me to. I will always walk straight ahead toward new horizons.  -p. 180

Oh, to be able to read this in it's original language.  Ah well....

Posted by Anne@HeadFullofBooks at 3:29 PM