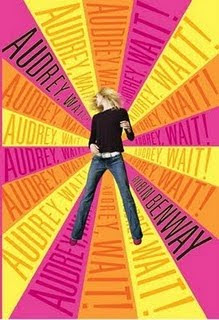 Some YA books are so thoughtful and touching, so mature, yet young and fresh. While other YA books are, well, so YA.  Audrey, Wait! by Robin Benway falls into the later category.  Don't get me wrong.  I liked the book.  In fact, I enjoyed it a lot. I just found the storyline and the characters to be so teenager-ish.  Perhaps, since I'm not a teenager, it is a good thing and, therefore, it should appeal to teens.  If an adult thinks that a book suffers from teenage-itis then it follows that teens should like it, right? (As a side note, a 12th grade girl stopped by my desk yesterday to tell me about another book I had asked her to preview for me.  She said, "I liked the books, but it was so teenager-ish." Guess I'm not the only one who notices.)

Here is a quick, quick summary: Audrey, a music-crazed teenager, breaks up with her musician boyfriend, Evan, who writes a hit song about the break-up called Audrey, Wait! As the song climbs the charts Audrey becomes an object of attention as the muse who inspired the song that everyone likes. Everything that Audrey does, no matter how small and insignificant, seems to just draw more and more attention until her life seems to be controlled by the paparazzi and "her fans".

I must admit that I was surprised by this twist in the plot.  I really thought when I read the summary on the back of the book that Audrey would have been unpopular for actually breaking up with Evan rather than becoming wildly popular herself.

Here are two quotes from the book that I think do a nice job of showing Benway's writing:

"If kissing Simon had been like a wildfire, kissing James was something smaller and stronger. It was birthday and prayer candles, ones made for good thoughts and strong hopes and wishes and promises. I needed some of those now." -p. 219

I will certainly recommend this book to my patrons and hope to get it into as many reader's hands as possible.

Posted by Anne@HeadFullofBooks at 3:18 PM