This Book is Overdue! by Marilyn Johnson 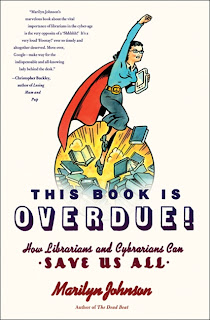 The title of the book says it all! This Book is Overdue! How Librarians and Cybrarians Can Save Us All by Marilyn Johnson.  This book is about librarians and I think, for librarians. Therefore, I hereby grant you permission to not read this diary if you aren't a librarian. But if you are, I urge you to stick around and read this review and, hopefully, pick up the book and read it yourself.

I purchased this book almost a year ago and tucked it into a pile of books out of the way and promptly forgot it. So imagine my delight when I unearthed it earlier this month. The title alone enticed me to purchase it, though I admit that I am a sucker for any book, joke, story, video, movie, etc. where librarians are thought of as heroes (or at least good, decent folk!) The author, Marilyn Johnson, is not a librarian though she is obviously a fan as evidenced by the opening quotes:


Show me a computer expert who gives a damn, and I'll show you a librarian. ---Patricia Wilson Berger, former President, ALA

In tough times, a librarian is a terrible thing to waste. ---pg.1

Librarians' values are as sound as Girl Scouts': truth, free speech, and universal literacy. And, like Scouts, they possess a quality that I think makes librarians invaluable and indispensable: they want to help. They want to help us.  ---pg. 8

The book is organized around chapters that all point to libraries and librarians of the future. While well-researched and very factual, the book also uses concrete examples of real-life situations that I found to be both very interesting and inspiring (possibly even motivating) and, in some cases, a bit irrelevant.  As a school librarian I am not concerned with some aspects of the public librarian's job (such as archiving) though I found those chapters fascinating, and many aspects of my job weren't covered here.  Throughout my reading I found myself challenged to hone my technology skills and to find ways to make myself indispensable. I was also soothed by the author's compliments and recognition of our value as a profession.


Still---what price could you put on the professional who took up your whimsical search with enthusiasm and spent his day ensuring its success? ---p. 21

'Oh!' she said, her face lighting up, 'I love that book.' (Someday, I will stop being surprised at all the things librarians read; they'll read anything.) Then she took me to the...corner of the library, found Maus, and placed it in my hands with a blessing. 'I hope you love it, too.' --- pg. 49,50

I snickered my way through the chapter on the blogging librarian...because, hey, that's me (and I'm guessing it is you, too!)  Johnson said she thought that librarians would be the last people to get involved with social networking.  Yet she acknowledged with surprise that librarians have "taken up blogging with a vengeance." (50)

Pride for my profession swelled as I read the chapter about the Connecticut Four who stood up to the Federal government and the Patriot Act in defense "of free access to information and the right to privacy in our choices." (70)  I was in library school during the time when this case was being heard before the courts and I remember my husband calling me a "radical, militant librarian," a title which I still wear proudly.  No one can go all Big Brother on librarians because, well, we've read the book!


So here was the case in a nutshell: quiet librarians who wanted to keep quiet about patrons' records were told to give up those records and to remain silent about it. The librarians fought to be heard, and finally they were.  Now for the rest of their lives, they would be noisy, in defense of keeping quiet (81).

One of the many things I learned from this book is about the social networking site Second Life which has been very popular among librarians. Many also join the subgroup, InfoGroupies, and provide reference services for avatars on the site.  I attempted a visit to Second Life from my computer here at school, but it was blocked.  Ha-ha!  Note the irony.  I hope to learn more about this website but I'll have to do it from home or from a public library.

On providing services to all patrons Johnson quoted E.J. Josey, the second African-American president of the ALA, who said: "Information justice is a human rights issues; the public library must remain 'the people's university'...and librarians can get involved and shape the future or they can sit back and watch the changes." (204)  I like to think that school libraries are contributors to the 'people's university' as well, though we have limited patrons and we hope to send our patrons off to real college soon.

No longer can we just think of our libraries as brick and mortar buildings. As Tom Peters, blogging for the ALA, says:  "Perhaps a few forward-thinking library staffers...should openly declare that they serve the entire world, at least in theory." (246).  To which Johnson adds that she believes it is already happening.  And, "public libraries do, after all, hang signs that say 'public'."

In this day and age of budget cuts and job cuts, it was nice to read a book which clearly expanded on the value of my profession.  Johnson closes the book with this wonderful tribute to librarians:


I was under the librarians' protection. Civil servants and servants of civility, they had my back. They would be whatever they needed to be that day: information professionals, teachers, police, community organizers, computer technicians, historians, confidants, clerks, social workers, storytellers, or, in this case, guardians of the peace. (252)

Posted by Anne@HeadFullofBooks at 11:20 AM

Email ThisBlogThis!Share to TwitterShare to FacebookShare to Pinterest
Labels: Non-fiction