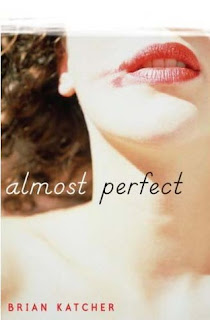 The Stonewall Book Award is an award for GLBT books begun in 1971 focusing on books that have exceptional merit related to the GLBT experience. This award is divided into three sections, the Barbara Gittings Literature Award, the Israle Fishman non-fiction award, and the Children’s and Young Adult Literature Award. This year's winner in the YA category was Almost Perfect by Brian Katcher.

Summary: Brenda, Logan's girlfriend of three years breaks up with him at the beginning of his senior year in high school.  Logan had thought that Brenda was "the one." Depressed and lonely he becomes quite smitten with the new girl in town, Sage, who is outrageously different than any other girl at the school .  Initially all of Logan's attempts at going further than friendly flirting in class with Sage are rebuffed. Though Sage seems interested in Logan there is something a little off.  Why can't Sage date while her younger sister can?  Why was she home-schooled and sequestered away from regular teen life for the years prior to this one? Every time Logan would even broach the subject of these inconsistencies Sage would change the subject.  That is until the day when Logan and Sage kiss for the first time and Sage reveals that she is really a boy. The rest of the book worked through the attraction and revulsion that Logan feels once he learns the truth.

Here is a portion of the review from Bulletin of the Center for Children's Books:


Katcher, author of Playing With Matches, manages a delicate balance here: Sage is utterly credible and utterly sympathetic, but so are Logan’s shock and reservations. His narration explores the emotional issues—does this mean he’s gay? Can he face his small Missouri town if people know?—while the story conveys the daunting details of Sage’s everyday realities, such as going to great lengths to avoid showing her driver’s license, which classifies her as male [....]  While transgender readers will find support here, the book’s focus on a bystander broadens the book’s relatability, and the message of acceptance is thoughtfully conveyed. *

Many of the reviews I read about Almost Perfect said that the book was too long.  I would agree that the book seemed overly long though I really can't think what bits needed to be removed to shorten up the book.  The School Library Journal mentioned in its review that the it was "remarkably 'clean' book dealing with sexuality and identity, this is neither preachy nor didactic while directly challenging prejudice and intolerance."*  It went on to say that Almost Perfect could be given to Middle School children who were undaunted by its length (357 pages.) I'm not sure that I would go that far.  Though the book had no overt sex scenes it did deal with many mature topics which included sex and under-age drinking.  I certainly wouldn't recommend it for any student under age fifteen.

What I liked best about Almost Perfect is that is dealt with the topic of transsexualism in a realistic way.  There were no easy answers for Sage. Making the change from boy to girl could happen physically but that didn't mean that everything emotionally and socially would suddenly fall into place.  The book didn't wrap up nice and neatly.  As in life, often there are strings left dangling, questions unresolved, and life left to live with ambiguity.  I actually think that the ending was nearly perfect because it left the reader to fill in the gaps and the imagine what the future could hold for these teens, for all teen in similar situations.  Bravo Brian Katcher for dealing with a tough topic with sensitivity and thoughtfulness!

As a side note.  When I told my husband that I was reading the Stonewall Award winning book about a GLBT issue he said that was a perfect name for the award.  I looked at him dumbly.  I didn't know about the Stonewall Inn Raids in the 1960s until he made this comment.  I have since read a little about them and learned that the raids made by police on the Stonewall Inn in 1969 and the riots that followed are often thought to be the beginning of the gay-rights movement. You, too, can learn more here.

Posted by Anne@HeadFullofBooks at 1:23 PM