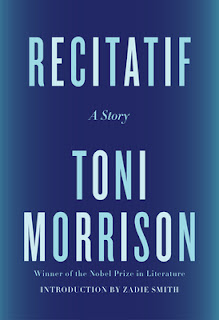 My mother danced all night and Roberta's was sick.

I was trying to fill the coffeepots and get them all situated on the electric burners when I saw her.

Summary: Twyla and Roberta have known each other since they were eight when they shared a room at a shelter for four months because their mothers couldn't care for them. Later in life they meet by chance three times, each time on opposite sides of every problem. One girl is black, the other white, but which is which?

Review: Recitatif is Toni Morrison's only published short story. She wrote it as "an experiment in the removal of all racial codes from a narrative about two characters of different races for whom racial identity is crucial." The story is written from Twyla's perspective and as a reader I found myself quite sure that I knew which race each girl was until a new set of facts were presented, then I'd change my mind. Morrison never divulged which girl was which race.

In the introduction by Zadie Smith, which was as long or longer than the actual story, she too grapples with the which is which question concluding with, "Recitatif reminds me that it is not essentially black or white to be poor, oppressed, lesser than, exploited, ignored." As I am learning every single day as my eyes are being opened to more and more racial exploitation in this country, race is a social construct. If one assigns attributes to one race (lazy/hard-working; undeserving/deserving, thuggish/law-abidding) it doesn't make those attributes true in all or even many cases. By removing these attributes from the story one has to conclude that people are just people.

The title of this short story had me a bit confused, but Zadie Smith helped clear up my confusion. The word 'recitatif' has two meanings: One is the spoken part of an opera, or words sung on the same note. Two is the tone or rhythm of a spoken language. In Recitatif Morrison had to play with language so that each spoken word was placed exactly on the line between white and black vernacular. Every word had to be spoken on one note since often our racial clues are learned through language. Though not a favorite short story by any means, I am grateful it was written and it certainly has provided some new and interesting ideas and food for thought.

Posted by Anne@HeadFullofBooks at 10:09 AM