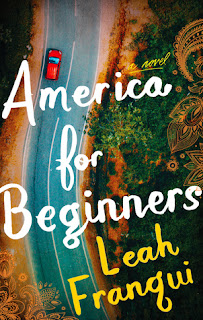 Imagine for a minute that you were not born in the United States and did not grow up learning about its history in school or seeing the sights as you vacationed around the country. To extend your imagination, pretend that you lived your whole life within an eight mile circumference of where you were born, so you probably didn't even know your own community that well. Or, imagine that you are from a country which really doesn't have a very long history and the formation of that country was really to just assign people to second class status. Now imagine that these two people come together for a tour trip around America, along with an America serving as a companion and that is what you get in the book America for Beginners.

When Pival Sengupta, a wealthy widow who has lived her whole life in Kolkata (Calcutta), decides she must come to America to look for her son, Rahi, who was disowned by her husband for being gay, a tour of the whole country seems like a good excuse to make the trip. Never mind that she has no relatives in America and knows very little about the country. She will book a tour with a good Indian company that promises an exceptional trip with some of the comforts of home, like Indian food at every meal. The company also promises an Indian tour guide and female companion for propriety for the whole trip.

Once in America Pival learns that her guide, Satya, isn't from India but from Bangladesh and he really knows very little about America himself but has learned to speak with authority even if what he says is not correct. Though Indians living in Kolkata share the cultural heritage and language of Bengali with those living in Bangladesh, they do not view them as equals. The companion, Rebecca, is from America but she is unhappy in her current underemployed state as a actress and takes the job just to make her rent payment for another month. So this ragtag threesome set off to explore America and in the process learn about themselves and become friends along the way.

America for Beginners may seem like a travel book but it is really a story about coming to a place of beginnings. It is not so much about the Lincoln Memorial, the Liberty Bell, the Grand Canyon, or the music of New Orleans. It is about what all those things stand for and what a newbie can learn about him or herself as they internalize these things after seeing them for the first time. It is about finding yourself in a land of freedom and allowing yourself to untie the knots of bondage that encircle you. Mrs. Sengupta doesn't have to die because she has no family. Satya doesn't have to be a second class citizen because of his birth place. Rebecca doesn't have to be miserable living in New York when the whole country calls to her.

I started listening to this audiobook with absolutely no preconceived notions and I was delighted to learn new information about India and Bangladesh. It was fun to see places in America through a new set of eyes. Leah Franqui describes herself as a Puerto Rican Jewish native of Philadelphia who now lives in Mumbai. Her own cultural and religious experiences bring a a freshness of perspective to the story. For example, she shared that she was shocked to learn that homosexuality is still thought of as a mental illness in India, a condition from which one can be cured.

I read the book as a book club selection and I know we will have a wonderful discussion.