Audiobook Review: There There by Tommy Orange 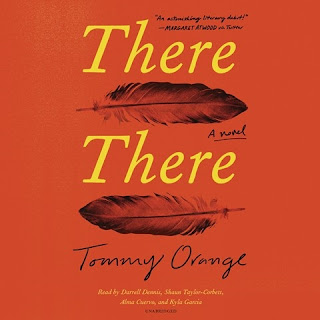 I am reeling. I just got done listening to There There by Tommy Orange and I don't know what to think and what to feel.

There There was one of the top ten books of 2018 and won the Center for Fiction First Novel Prize. And it is a simply astonishing audiobook utilizing four narrators to cover the twelve main characters we meet in the novel.  Orange wanted to write a book about urban Indians, similar to those he knew growing up in Oakland himself. These Indians “came to know the downtown Oakland skyline better than we did any sacred mountain range, the redwoods in the Oakland hills better than any other deep wild forest.” The title of the book comes from a Gertrude Stein quote about Oakland, "there is no there there."

The first character we meet is Tony, a kid with fetal alcohol syndrome that he calls "Drome." He scores low on the intelligence test but he knows what he knows and he loves his grandma who is raising him. He gets mixed up with some petty criminals who sell drugs and make plastic guns and plan to rob the powwow of the prize money. Right from the start we know to dread what will happen at the powwow. Other characters' stories emerge, too. Jacquie Red Feather and her half sister Opal Viola Victoria Bear Shield who we meet the day, in 1969, that their mother takes them to Alcatraz Island to participate in takeover of the island by indigenous people. Later, after their mother's death, the sisters drift apart but plan to reunite at the powwow. Another character, Dene Oxendene wins a grant from the city to collect stories from the urban Indians living in Oakland. He plans to set up a sound-booth at the powwow to collect as many stories as he can, like the Story Corps project. Honestly there are so many characters and their stories intertwine so much, I can only imagine that my friends Jane and Betty, if they were reading the book, would need to take notes and to draw a character map. (I say this with love. We are in book club together and both of them are famous for taking scrupulous notes on much less complicated books than this one.)

What really sets the stage for this fantastic book, however, is the heartbreaking prologue, a ten-page riff of sorts on the 500-year history of the American Indian with all its genocide, dislocations, and racism. He begins the prologue with a description that only old people like me remember...the Indian head test pattern on TVs at the end of each night's programming. We revisit this test pattern later in the book when a character sees it and is struck by the wrongness of it. Orange concludes the prologue with this tongue-in-cheek comment:


Our heads are on flags, jerseys, and coins. Our heads were on the penny first, of course, the Indian cent, and then on the buffalo nickel, both before we could even vote as a people — which, like the truth of what happened in history all over the world, and like all that spilled blood from slaughter, are now out of circulation.

Throughout the novel, Orange steps in several times for interludes and digressions, to remind the reader that yes this book is a work of fiction but it is also true.

Why was I reeling by the end of the book? Because the story broke my heart but also stitched it back together. I didn't know if I should cry or cheer. One character, I think his name was Tommy (hmm?) really spoke to me about the importance of culture. His while life was adrift and almost completely wrecked by alcohol when he found drumming. In drumming he could finally hear his own heartbeat and in the process reclaimed himself. It breaks my heart to think about so many citizens of this country who don't want anyone to celebrate heritage unless it "their" heritage.

About the audiobook, I stumbled upon an interview conducted for BOT (Books on Tape) with the producer, Sarah Jaffre. I thought this question and answer were especially revealing about how special this book is in the audio format:

Did you have a clear vision from the beginning that this would be a multi-voice narration?

Absolutely. This explosive, gorgeously realized, utterly unique book is told by a kaleidoscopic range of voices, and it felt important that the audiobook stay true to the rich, clamorous sense of texture and vitality that’s so propulsive on the page, and capture the same messy, human window into a community pulsing with a wide variety of experiences, motivations, and perspectives that Tommy Orange has so beautifully crafted.


One more thing. I understand that Sherman Alexie, a favorite author who is much maligned right now for personal boundary issues, helped Tommy Orange as he prepared this book. Orange gave Alexie a shout-out, which I think is such a kind thing to do. So many people run away when someone is in trouble and Orange didn't do that.

I'll close with quotes found on bumper stickers at the Big Oakland Powwow...


"My Other Vehicle Is a War Pony"
and
"Fighting Terrorism Since 1492."

Posted by Anne@HeadFullofBooks at 7:38 PM