Weather: Overcast and cool temperatures; after a rainy week in New York.

New York: We just got back from our week in New York where we traveled to be with our daughter Carly, who graduated with a Master of Science in Human Genetics from Sarah Lawrence College. Rita also joined us for the week but returned home two days earlier.
Graduation: Carly graduated with 27 other students in her cohort group in Human Genetics, and about 100 students from several other graduate programs on Thursday afternoon. The day began with a nice reception at Wrexham Hall where we could interact with the Human Genetics program staff, students, and parents. Ken and Carol joined us for the day. After the ceremony, which took place under a big tent in the middle of campus, the university put on a nice reception outside where Carly had a chance to say her goodbyes to beloved classmates. Earlier in the week, she and her program members presented their capstone thesis research projects in a symposium which was interesting and illuminating. We couldn't be prouder of our dear girl! 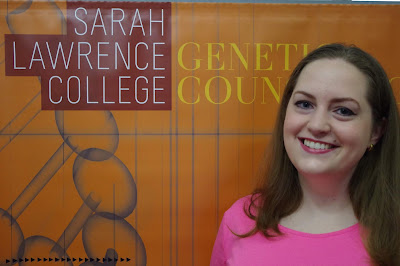 Moving: Part of the week was focused on preparing Carly for her move from Yonkers to San Francisco where she will start her first job as a genetic counselor. She still hasn't located an apartment there so we made the decision to ditch all of her furniture and to pack up clothing and personal items. I will return to New York in two weeks, and then Carly and I will jump in her loaded car and drive back across country. In the meantime she will work with a realtor in San Fran and her cousin who lives there in hopes that she can find a new abode. Lots of changes!

While in New York: We didn't spend the whole week on graduation and moving preparations. We did go into the city on several occasions. Last Sunday we saw a matinee of "Waitress". Don said the musical was exceptional because he cried three times. Ha! It really is a wonderful combination of touching, funny, and poignant. Tuesday the four of us went to the 9-11 Memorial Museum. Carly had to return to her school for commencement rehearsal and a dinner for the graduates. Rita, Don and I went back to Broadway to see the musical "Once On This Island". It was a unique show, presented in theater in the round and we thoroughly enjoyed it, too. Prior to seeing this show, we walked to the New York Public Library. We saw three special exhibitions: Shared Sacred Places, Remembering the 60's, and Winnie-the-Pooh (original toys). All were so different but wonderful in their own way. We went back into the city on Wednesday evening. Don and I, joined by Ken and Carol, went to the musical "Come From Away" about the 9-11 experience in Gander, Newfoundland, where over 30 jet airliners were diverted to that location when the US air space was closed after the attacks on the World Trade Center and the Pentagon. "Come From Away" is a very emotional experience but also a healing one. After our day at the 9-11 Memorial Museum, the musical showed another perspective to the story of the 9-11 terrorist attacks. The girls attended a very different off-Broadway show, "Drunken Shakespeare."
Saying goodbye to Yonkers: Though it is not our favorite place on earth, it has been Carly's home for the last two years. Both Don and I found ourselves saying goodbye as we went about our business this past week. Goodbye to the Hyatt Place hotel where we have stayed every time we've visited Carly. Goodbye to her funky, yet quite spacious apartment. Goodbye to a favorite Italian restaurant we discovered when we moved Carly to Yonkers two years ago: Gianna's. Goodbye to Sarah Lawrence College and to Carly's home within the college: Wrexham Hall.

Books completed in New York (admittedly, I didn't get much reading done this trip):
Currently reading:

We flew out of Newark heading west toward home today. After an overnight stay with Ken and Carol in Westfield, NJ. Thanks for the yummy dinner, the card playing, and forever friendship. (And the ride to the airport at way-too-early-in-the-morning.)

Update on Dad: My father was discharged from the care center where he got some physical and occupational therapy. My brother is in town, staying with my folks. He says that Mom and Dad are doing OK, just moving quite slow. I will journey to Eugene on Tuesday to spend some time with them through the Memorial Day weekend. Then I will need to return for a few days before I head back to New York.

Posted by Anne@HeadFullofBooks at 4:56 PM