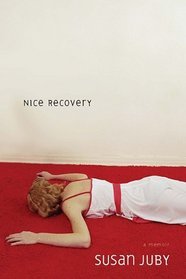 There was a time when I spent a lot of time reading addiction memoirs. Reading these memoirs was a little like waiting to watch the train wreck one knew was coming. Many were desperately depressing, no hope or good news in sight. Others contained way too many details, often sickening ones. While others seemed completely unbelievable, so much so I even moved one of these books from the biography section of the library to the fiction section. For this reason I decided to read Nice Recovery by Susan Juby with a measure of skepticism. In the book's forward Juby writes,  "Addiction memoirs have an odd reputation, and I find myself a little embarrassed to be writing one." Well, that was refreshing. At least Juby wasn't going to make it sound like she was bragging about her drinking/drugging experiences.

First I should say the reason I considered reading Nice Recovery at all was because I had just finished reading her novel, The Truth Commission, and I enjoyed the writing very much. The theme of the book, family dysfunction and how we communicate with one another, seemed a bit different than the typical YA book published these days. When I did a little investigating about Juby, I learned she was the author of the Alice series. This series has been a prime target for many book banning efforts over the years. That alone made me want to read more of her stuff. On her blog she mentioned she was a recovering alcoholic and she had written a book about her experiences with drinking and with recovery.

Years ago I read a memoir written by Bill W., the co-founder of Alcoholics Anonymous. In an early chapter he wrote that his first drinking experience should have informed him of the trouble ahead. He was so attracted to drinking because he felt a barrier between himself and humankind lift as soon as he drank. He felt attractive and like the life of the party. Even though it was the middle of prohibition, he continued to drink as often as he could and within a very short time he was blacking out and having very dangerous symptoms. It was as if Bill W. was an alcoholic just waiting for alcohol. That was the exact sense I got from Juby about her drinking. The very first line of the book sets up the reader to believe she too was an alcoholic just waiting for alcohol. "I sometimes imagine my pre-drinking personality as a rich field just waiting for some mind-altering substance to come along so that my alcoholic self could sprout and flourish."

Juby began drinking at a very young age, in middle school. Within a very short time she was drinking to the point of blacking out, which is an indication of very serious complications. By the time she was in high school she drank every day and always drank to extremes. Surprisingly, she only remembers one adult telling her she should not drink so much during this period of extreme drinking. By the time she moved to Toronto to attend college she could no longer keep her life together. She had a scary experience with a dangerous man. Rape was implied but not detailed. She was sick and tired of being sick and tired. She attended an AA meeting near her home. The first step in her recovery. The second half of her book was all about her recovery and included others' stories with their recovery, as well. Juby defines winners as "people who stay clean and sober, or alt least try really hard to." She believes this sobriety is best achieved with the help of Alcoholics Anonymous or Narcotics Anonymous.

Juby's memoir Nice Recovery is very well done. I never felt like I was a voyeur in her life yet I got quite a few insights into the addiction process and the tremendous work of recovery. For this reason I will easily recommend this memoir to teen readers looking for a book about addiction. Chris Crutcher, author of many YA books, says this about Nice Recovery, "This is not a young adult book; it is not an adult book. It is a human book with the power to literally save lives." That is a powerful recommendation.

Posted by Anne@HeadFullofBooks at 11:24 AM