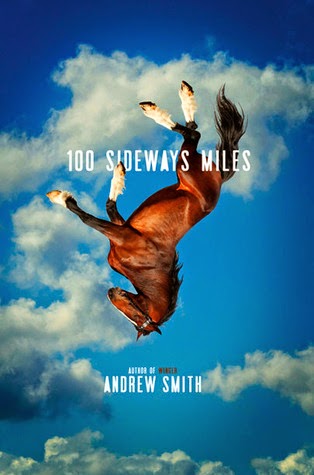 A lot of things factor into the writing of a book review, as you fellow bloggers know. Immediate impressions of the writing and the themes, likeable characters, believable plots, relatability to the book, all these things factor in to my willingness to sit down and take the time to write a review. Unfortunately, the longer I put off the review, the less likely it is that I will even come back around it as the story starts to fade in my mind.

Such is the case with 100 Sideways Miles by Andrew Smith. I liked the book but it was just weird enough that I didn't (don't) know how to write a review of it. I read the book months ago and today, finally, I make my first stab at a review of it. Should I focus on the weird way that the main character, Finn, prefers to measure time in miles? I don't even know how he does it. He has got it figured out that the Earth rotates around the sun at a rate of 20 miles per second which leads him to the conclusion that the event where a dead horse fell from the bridge, killing his mother and rendering him as an epileptic, took five seconds or 100 sideways miles. Even though the time/distance thing is weird it doesn't dominate the book. It appears more like a quirky literary device. I liked it but since I personally can't do the calculations I started ignoring the time/distance references.

Next I wondered if a better way to review the book was to hold it up next to other books by Smith and kind of do a Venn-diagram-thing by comparing and contrasting them. That idea would work except I couldn't think of many things to compare except the use of foul language and sexual messages, lots of them, and how much print space should be dedicated to these topics? Well, actually I do want to say a bit about the foul language. I am not a prude. I've been an educator for a lot of years working with teens. I know many teens often supplant actual verbs and nouns for foul words. But does every other word out of a characters mouth need to be a foul word? Sigh. The abundant use of foul language actually reduced my enjoyment of the book. All three of the books contain LOTS of foul language with this one topping the list. The sexual content actually worried me enough that I considered not placing 100 Sideways Miles and The Grasshopper Jungle on my Mock Printz reading list. I was worried what parents would think.

Actually now that I am on a comparison vein I should mention that a lot of reviewers are comparing 100 Sideways Miles to Smith's other works, especially Winger and The Grasshopper Jungle and most think that this book is a bit more complex and well-done. I honestly liked all the books but worry about them in equal measure. (See note above.) Both Grasshopper and 100 are coming-of-age tales which really explore the friendship between boys, Finn and Cade in this book/Austin and Robby in Grasshopper. These relationships are well fleshed-out whereas girlfriends in the books are just peripheral characters. Since I am always looking for books that would be attractive to male readers this is a real asset. Boys at my school get so tired of reading those "lovey-dovey" books obviously aimed at female readers. Neither of these books would be described  that way , even though Finn does experience first love and his atoms turn all sticky around Julia.

Lest you think the two books are the same story with two different covers, they are not. Soon after the coming-of-age beginning, Grasshopper Jungle veers sharply into the Science Fiction realm with big, gigantic insects eating up everything and awful happenings to the world because of the actions of the two boys, Austin and Robby. Nothing nearly so melodramatic happens in this book but the ending is tremendously satisfying and, I should mention, involves a bridge and a jump that lasted, oh let's say, probably about 100 sideways miles.