Holocaust Literature...filling in the blanks in my own knowledge 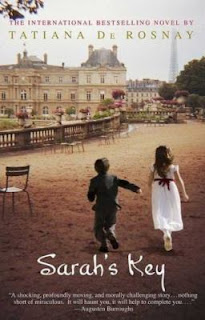 I am currently finishing up the Jewish Holocaust story, Sarah's Key by Tatiana de Rosnay. In the story a journalist is assigned the task of reporting on the 60th anniversary of the Vel'd'Hiv roundup, a horrific event during WWII where French police rounded up Jewish families, sending them ultimately to their deaths. Along the way they separated mothers from their children. The parents were sent to death camps in Poland and the children were left behind to essentially fend for themselves in camps guarded by French police. Hundreds of thousands of French Jews lost their lives and few children survived either.

It was a dark period in French history.  One that I knew nothing about until I read this book. It got me thinking about how spotty my holocaust education has been over the years. But thanks to literature I am starting to fill in the blanks. Here are some other books that have helped fill in my incomplete knowledge of this horrific event in world history.


The Diary of Anne Frank ...the first holocaust book that I read, that most people read on the topic. I was so touched by this diary of a young Dutch girl who had to hide, with her family, in an attempt to avoid the Nazi occupiers. For fuller knowledge of the Frank Family I also read Anne Frank: Beyond the Diary, a photographic remembrance by Ruud van der Rol.

Schindler's List by Thomas Keneally...the fictional account of an actual Holocaust hero, Oscar Schindler whose actions saved nearly 2000 Polish Jews. Even as I was reading this book I thought that it should be required reading for every citizen of the world. I tell my students that it is fiction because the author filled in conversations and actions that may not have occurred. For many readers it is best to get their history lessons with a plot and other literary devices!

The Zookeeper's Wife by Diane Ackerman... is a true account of Jan and Antonina Zabinski, Christian zookeepers at the Warsaw Zoo, who helped save the lives of approximately three hundred Polish Jews during World War II by housing and feeding them on zoo grounds and teaching them how to "pass" as Aryan. I learned a lot from this book about the uniquely terrible experience that Polish Jews experiences because Hitler not only hated Jews, he also hated Poles.

Night by Elie Wiesel...a young Jewish boy from Romania serves as a witness to the world of the atrocities of the Nazi Death Camps. Somehow I avoided reading this book until I was well into adulthood.  It is so powerful and eye-opening. How can anyone allow genocide to occur anywhere int he world after reading this book?

The Hiding Place by Corrie Ten Boom...the touching account of the Ten Booms, a Dutch family who hid Jews in their home during Nazi occupation in their country. The father and his two daughters were arrested and sent to a concentration camp. Only Corrie survived. This book is told from a Christian point of view and addresses the issue of how to forgive after such atrocities.

Milkweed by Jerry Spinelli... A street child, known to himself only as Stopthief, finds community when he is taken in by a band of orphans in Warsaw ghetto which helps him weather the horrors of the Nazi regime. Though this is a fiction story for young adults it is enlightening about the horrors that occurred in the Warsaw ghetto. It is very readable, too.

Number the Stars by Lois Lowry... a junior book set in Denmark during the Nazi's occupation a young girl and her family help save a Jewish friend. Unlike in many other countries, the Danes, at personal risk to themselves, helped evacuate over 8,000 Jews to Sweden so that very few Danish Jews died at the hands of the Nazis during the war. My daughters read and loved this book when they were in elementary school.

The Book Thief by Marcus Zusak... a young German girl is forced to live in a foster home because her parents were deemed to be enemies of the state. While in the new home she and the family help hide and shelter a Jewish man. Though this book isn't exclusively about the holocaust and the Jewish experience it is still a serious condemnation of war. This is not only my favorite holocaust book, it is one of my favorite YA books of all times.

Day After Night by Anita Diamante...A tale inspired by the post-Holocaust experience is set in an immigrant holding camp in 1945 Palestine, where four women, refugees from Nazi Europe, find healing in the bonds of friendship that are forged while recounting their losses. I was shocked to learn that Jews, who survived the horrors of WWII were imprisoned at Atlit, an internment camp run by the British for illegal aliens, when they finally made it to Palestine. This is an eye opening account of the a remarkable raid which freed 200 Jews from this camp.

What books would you recommend to the a young adult reader to help enlarge their knowledge of the Holocaust experience?

Posted by Anne@HeadFullofBooks at 7:51 PM