Review: The Returning by Christine Hinwood 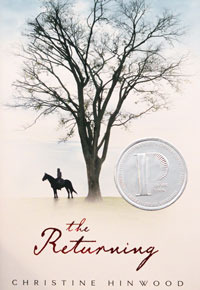 With the reading of The Returning by Christine Hinwood I have completed The Printz Award Book Challenge for the year. This book won a 2012 Printz for it's superb writing and imaginative plotting. Set in a by-gone non-magical era with a whole cast of characters living in the Uplands and the Lowlands.  When a war breaks out between the people of the two lands Cam answers the call to fight. But when he returns home his life isn't as he thought it would be.  Now what does he do?


Cam has a hunger, an always-hunger; it drives him from home, to war, from north to south. When he returns from war alone - all his fellow soldiers slain - suspicion swirls around him. He's damaged in body and soul, yet he rides a fine horse and speaks well of his foes. What has he witnessed? Where does his true allegiance lie? How will life unfold for his little sister, his closest friend, his betrothed, his community, and even the enemy Lord who maimed him?---from Goodreads

Though it is fairly easy to imagine this land from Hinwood's writing, the tale was very confusing to me.  There are so many characters and many with similar names. The use of "made up" words and phrases is confusing. What is the meaning? Often the only transition that indicated a time or setting change was a extra space on the page. What just happened and when did occur? The point-of-view is constantly changing at the same time. I think I spent 200 of the 300 pages trying to figure out what was happening before I could just get swept up in the story as it neared completion. Because of all these issues, this book will only get limited recommendations from me.  I know there are students who read fantasy and enjoy books about imaginary lands who will find a lot to like in this book. The average reader, however, will likely be too frustrated by the confusing aspects of the book to wade through it.

As I closed the book on the last page I had a very satisfied feeling. It was worth the effort to make my way through this imaginative and unique story.

Posted by Anne@HeadFullofBooks at 10:29 AM