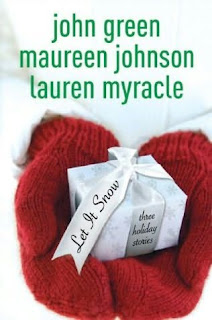 Let me say this at the outset-I am a huge John Green fan.  So it is rather shocking that I've had Let It Snow in my library for two years without reading it. It also explains why, when I finally did decide to read it, I would just naturally start with John Green's story, A Cheertastic Christmas Miracle, the middle story of the three.  Big mistake! Though it says it right on the cover I somehow missed the memo that this isn't a book of three separate Christmas short stories. Rather, it is a book of three interconnected stories that build on the information and characters from the story before.  Ha!  Don't make my mistake.  Read this book like any other book from beginning to end.

The stories in Let It Snow: Three Holiday Romances are all set in a small town in North Carolina on Christmas Eve.  The town has been hit by a huge blizzard which causes all kinds of transportation problems:  a stranded train, cars driven into snowbanks, and people being forced to walk in freezing temperatures.  Every story somehow weaves common threads -- the Waffle House, Starbucks, cheerleaders (named Amber and Madison) -- into the storyline.  Each main character finds love and kisses, together with quite a bit of hilarity along the way, making for fun and poignant Christmas memories.

I liked each of the stories, but I think I liked each one for different reasons.  The Jubilee Express, by Maureen Johnson, was the story that probably touched me the most and I enjoyed the author's gentle humor and writing style.  The Patron Saints of Pigs by Lauren Myracle reminded me a bit of the movie, It's a Wonderful Life, with its talk of angels and the need for emotional growth and acceptance.  John Green's A Cheertastic Christmas Miracle featured my least favorite characters including a bunch of stranded cheerleaders and a romance that didn't seem to work quite as well as in the other two. But, hey, I read it out of order and it was full of John Green humor, which I adore.

High literature? No.  Fun, YA lit?  Yes. Will I recommend this book to my students this holiday season?  You bet. In fact, I already have.

Posted by Anne@HeadFullofBooks at 11:42 AM