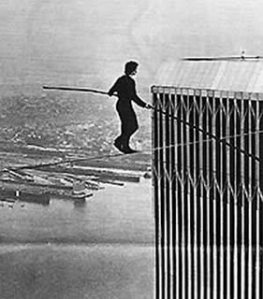 I am completely obsessed with the story behind the book Let the Great World Spin by Colum McCann right now. On August 7, 1974 Philippe Petit, a French acrobat, tightrope walked between the nearly complete Twin Towers 110 stories above New York City. His remarkable stunt gained him quite a bit of notoriety at the time---he was sentenced to community service by performing his tight-wire act in Central Park in lieu of other punishments---but until September 11, 2001 he had slipped into obscurity. Since 9-11 Petit has published a book about the event, To Reach the Clouds, and was the subject of a documentary film, Man on Wire, by British documentary director James Marsh. He also was immortalized in the wonderful Caldecott Medal Children's book, The Man Who Walked Between the Towers written and illustrated by Mordicai Gerstein. In this book Petit's story is actually secondary to the collection of short stories that all come together around his famous walk.

Mari Malcolm for Amazon.com summed up the book this way:


This extraordinary, real-life feat by French funambulist Philippe Petit becomes the touchstone for stories that briefly submerge you in ten varied and intense lives--a street priest, heroin-addicted hookers, mothers mourning sons lost in war, young artists, a Park Avenue judge. All their lives are ordinary and unforgettable, overlapping at the edges, occasionally converging. And when they coalesce in the final pages, the moment hums with such grace that its memory might tighten your throat weeks later.

Not all the short stories were as good as the others, nor did I like all the characters as much as the others but the street priest, Corrigan, had such a compelling life story that I kept turning the pages in hopes of more information about him. The book won the 2009 National Book Award for good reason.  There were so many moments of sheer genius in the writing that I added over twenty tags to my copy of book so that I can remember them when I meet with my book group this week.

For example here are a few good quotes.  This first quote is about Corrigan:


He was the origin of things and now I had a meaning for my brother--he was a crack of light under the door, and yet the door was shut to him. Only bits and pieces of him would leak out and he would end up barricaded behind that which he penetrated. p. 67

This quote is made by one of the mothers whose sons all died fighting in Vietnam:

About Philippe Petit's motivation to walk between the towers:


He had, it seemed, scoped out the building for six years and finally not just walked, but danced, across, even lay down on the cable. He said that if he saw oranges he wanted to juggle them, if he saw skyscrapers he wanted to walk between them. I wondered what he might do if he walked into the diner and found the scattered pieces of me, lying around, too many of them to juggle. p. 130-131

Jonathan Mahler's review of Let the Great World Spin in the New York Times Sunday Book Review is so good I want you to read it because there is no way I can even begin to elaborate about the book the way he does.  He makes one point about the book which was a little distracting for those of us who were actually alive in 1974.  McCann doesn't even try to be completely accurate about some of the historical and cultural events of the day. For example he talks about buying video cameras and computer hacking both of which weren't in use/possible in 1974.  He could have made the book more accurate, but didn't. Fortunately these inconsistencies don't detract from the wonderful prose and the compelling stories.

As you can tell from this review, I highly recommend this book.  I even think that strong teen readers would enjoy it and I will get a copy for my library. My very most favorite part of the book, however, is that it caused me to be curious, to go out and find out more information than I knew before.  That is great fiction, my friends!

Posted by Anne@HeadFullofBooks at 3:34 PM