The Good, the Bad, and the BARBIE by Tanya Lee Stone 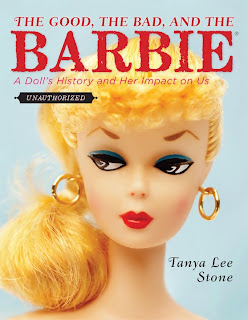 The Good, the Bad, and the Barbie is part biography—both of the doll and of her inventor, Ruth Handler—and part exploration of the cultural phenomenon that is Barbie. Filled with personal anecdotes, memories, and opinions from people of all ages, and featuring original color and black and white photographs, this book is for anyone who understands that we’re all living in a Barbie world.-From the Tanya Lee Stone website

I admit it, I love Barbie. My older sister, Kathy, and I had some of the earliest Barbies.  In fact, I think that Kathy's Barbie was a first edition Barbie.  I'll have to ask her to make sure.  Mine was the Barbie with the bob hair style, which was apparently so stylish in the early 1960s thanks to Jacqueline Kennedy. Over the years my friends and I played with our Barbie (singular) whenever we had a chance.  My best friend Kay had a Midge doll which I totally loved and coveted. We sewed outfits for them.  I still have a few of these homemade gems in my Barbie suitcase where all my treasured dolls still reside. Every year for Christmas I'd want one more Barbie companion, so I amassed a few other dolls (see photo below): Alan (friend to Ken), Skipper, Francie, Ricky (Skipper's boyfriend), Skipper's best friend (I've forgotten her name), and one more Barbie with the new head of the day and hair pieces to change her hair style. When I outgrew playing with my dolls I displayed them in my room for several more years before I put them away in my case and saved them from sure destruction by my little sister. When my daughters were old enough to be interested in Barbie, I would only let them play with my dolls on special occasions and only with the promise that they would not mix them up with their own dolls.  They still have to ask to see my collection.  With this devoted love of Barbie in mind, is it any wonder that I not only ordered Tanya Lee Stone's new book, The Good, the Bad, and the Barbie, but read it immediately after it arrived?

The book begins with the creation of the Mattel company, and some biographical information about its founder, Ruth Handler.  It then goes into the material on how Barbie has influenced materialism, body-image, multiculturalism, nudity, and even art.  A clever aspect of the book is how Stone interspersed quotes from average and famous people as they reflected on Barbie's influence on their own lives. It also had many photos, both color and black./white, to show us the evolution of the doll. The funniest chapter included descriptions of the things people did to Barbie after they outgrew playing with their dolls.  Many people found ways to torture her, including the person who took the Marie Antoinette Barbie and cut off her head, even adding ketchup as fake blood (p. 88).

Margaux Lange, an artist who makes wearable art with a Barbie theme:


...admits that she spent a childhood obsessed with Barbie and her miniature world. Her pursuit helped her explore a 'love-hate relationship: fond childhood memories balanced against adult discomfort with the doll as a problematic role model' (p. 99).

Lange's quote really gets to the crux of the book.  Adults are uncomfortable with Barbie, as if she is a real person, and children view her as a toy; a doll with which they want to play.  Since I'm a Barbie fan I was a bit taken aback by all the Barbie-bashing in the book. But as the author, who admits to not liking Barbie as a child, said about herself and Barbie:


...that how ever many people there were out in the world who knew me, there would be that many different perspectives of who I am. We all impose our own ideas and perceptions on the world, and Barbie may just be the ultimate scapegoat (p.109).

Whether you love Barbie or hate her, this book is a gem.  Plus, at only 109 pages, it is an easy, fast read.  I recommend that you take a look at the book. And, while you are thinking about it, let me know some of your Barbie memories.  I'd love to hear from you.

Posted by Anne@HeadFullofBooks at 12:05 PM