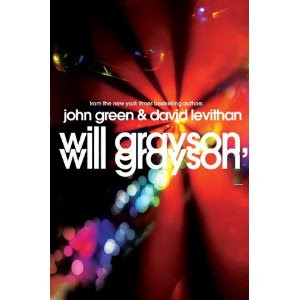 This is the story by two fabulous YA authors about Tiny Cooper, "the world's largest person who is really, really gay" and two boys, both named Will Grayson whose lives intersect one night in Chicago. Will Grayson (owg) and Tiny have been best friends since 5th grade. Will has often stood by Tiny when his love life has gone sour and now Tiny attempts to set up Will with Jane so that he too can find love. The attempted set up falls apart when Will can't get into the club to hear the band and is left outside waiting for his friends. He ducks into a shop to wait and he here he meets the other will grayson (lower case) who is waiting for a male date that will never show up. Later Tiny helps will grayson through his disappointment and pain. While these relationships (and others) are evolving, Tiny is busy writing, producing, directing, casting, and performing in his own musical creation, Tiny Dancer, a musical about love and his life.

Two recurring themes of the book are that "love is tied to truth" and "being friends, that's just something you are". I found the book to be irresistible, especially during the opening night of the musical. I didn't find the book as humorous as many reviewers, but I was very moved by the deep friendship between the main characters. The story is told in alternating chapters from each Will Grayson's point of view (one in lower case) and is full of honest language, which I admit somewhat bothered me in the beginning. But the ending was so awesome that any memories of earlier discomfort on my part were wiped away. In fact, I love the ending so much I think I'll go reread it right now.

Now take a minute (literally) to view John Green in a video clip about the book. It'll make you smile, I promise.

*Now that book did not suffer from a shortage of musical numbers!
Posted by Anne@HeadFullofBooks at 5:52 PM