The Red Necklace: A Story of the French Revolution 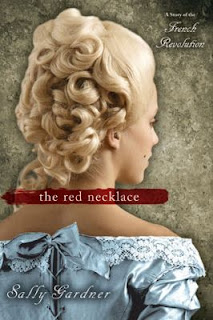 We just completed a week of student-led conferences at our school. Students were required to stand before their adviser and parent(s) while talking about schooling experiences, goals, and challenges from the past year. Many talked about their favorite and least favorite classes. With one exception, all of the students expressed their dislike of their history class. After reading this book I was struck by the irony of that. Here is a book about a revolution where all the aristocracy had their heads lobbed off and the underclass became murderous mobs. How can anyone think that history is boring? I will hazard a guess that the problem lies in the volume of material that should be covered so that there isn't time to tarry on every really interesting tidbit from history.... or, today's students have grown up with such dramatic action movies to wow them that bloody revolutions seem tame in comparison. Either way, it is a shame because this is really interesting stuff.

Even though I was fascinated by Marie Antoinette ("Let them eat cake") and Louis the XVI as a teenager I really had no idea what the French Revolution was about. I didn't know, until I read this book, that the aristocracy and the clergy paid no taxes at all. All the taxes were paid by the middle class and the peasants. And when the aristocracy wanted to enhance their already lavish lifestyles they would just raise the rent on the already overburdened lower class. It really is delightful to learn history while reading a fictional book. It never feels like work and there is a storyline or a mystery to keep the reader moving along.

Sally Gardner admits that this book wasn't designed to be a completely accurate depiction of the French Revolution but there was certainly enough information about the lavish lifestyles of the few and the anger of the masses to pique my curiosity to learn even more. I challenge myself to read more historical fiction in the future.
Posted by Anne@HeadFullofBooks at 8:25 AM