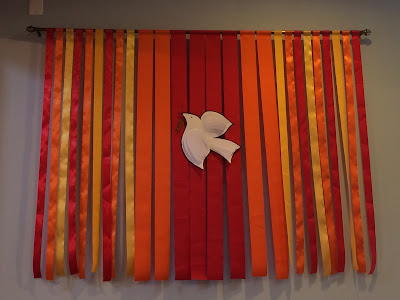 Weather: Beautiful. Don is out cleaning the deck, getting ready for next weekend. 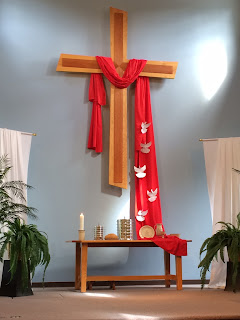 Pentecost Sunday: The day in the church calendar when Christians celebrate the in-filling of the Holy Spirit. Our church members all dress in red and today our sanctuary was decked out in red, too. We are reminded on this day that Go'd spirit lives within us and that means his power is available to us.


Retirement Party: This week I hosted my own retirement party after school. Over 70 people came including three of my principals, several coworkers I haven't seen in years, lots of friends from my book club and church, and, of course, folks from my current school. I decided years ago that when I retire I wanted to do it up right, with a party and giving everyone a chance to say goodbye.  A lot of teachers seem to just slip away during summer vacation so we never get a chance to say goodbye. I had a lot of fun. Thanks for coming, everyone!

Hail and Farewell: This past week I also said goodbye to my Honor Society students and co-advisor in an event we call Hail and Farewell, where we send off the seniors and welcome in the new club officers. This year the club surprised me with a video show of the the seniors saying goodbye with an explanation of which of the four pillars of NHS I best represented. Tears were flowing freely. Thank you to Brad and everyone who participated. 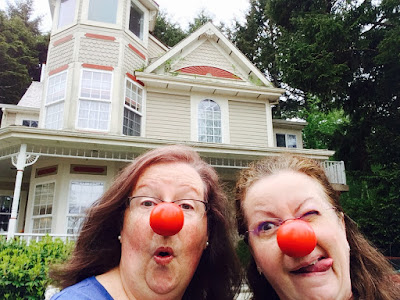 Memorial Day at the Oregon Coast: I spent last weekend at Seaside, Oregon with my best college friend, AnneMarie. We nearly talked non-stop we had so much catching up to do! We stayed in the best Air B-n-B...we had the third floor to ourselves and spent a good deal of the time in the turret (they called it the wine bar) looking out over the Pacific Ocean. You see the house in the background but just a portion of the turret. We also took lots of silly pictures wearing our noses for Red Nose Week in support programs to eliminate childhood hunger.

Getting ready for next weekend: When Don will be retiring from the National Guard with a ceremony at Camp Murray; when we will lost a reception afterward; and then a party that evening. The next day we will have everyone in the family back for a baby shower for Baby Adams. Should be quite a weekend. We've spent this weekend doing chores in preparation: changing sheets and cleaning the guest rooms; hosing off the deck and the deck furniture; ordering catering, and shopping for paper products. Whew.

Books completed the past two weeks: 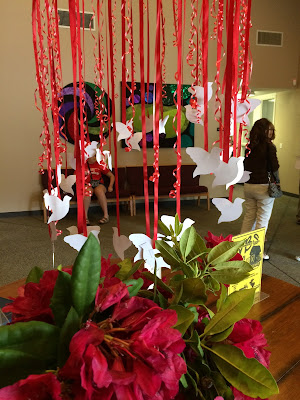 Old Turtle: An old turtle is called a mossback. I just learned this fact this weekend, just in time to rename our old truck. Our old truck has sat outside all winter and it was covered with dirt and moss like an old turtle. I was so grossed out about it, I forced my husband to run it through the car wash, which didn't get much if any of the moss of it so we had to wash the old guy by hand. Ha!

Have a wonderful week!

Posted by Anne@HeadFullofBooks at 7:30 PM