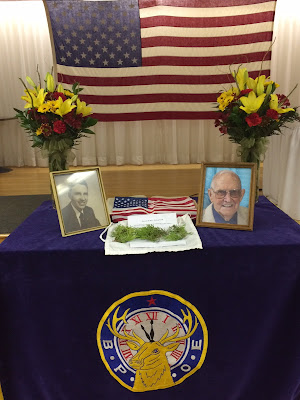 Weather: Overcast with sunbreaks. I do hope to run outside for a quick walk with the dog and to pull up the impatiens which got a bit soggy looking this past week. They are done for the year.

Curled up in a metaphorical ball: Almost a month ago my father-in-law died very suddenly. As is often the case, we were unprepared for his passing. Last night I had a stomach ache as I was preparing for bed. As I laid in the dark holding my stomach I thought of how these physical symptoms were mimicking my life right now. The pain and sorrow from grief have left me feeling like just curling up in a ball.

Last week-end we held a memorial service in Chet's honor and we helped host a social event afterwards so that family members could be together to swap stories and share the love. My father-in-law and his wife lived in Eastern Oregon (about five hours from our home) so we had to travel and spend several nights in a hotel. We were able to route our daughter, who is attending graduate school in New York, through the Pasco, Washington airport which was an easy half hour drive to pick her up so she could join us for the weekend. Everything about the event and the whole weekend was good. Don and I both spoke at the service and our son-in-law participated in the portion of the ceremony conducted by the Masons. We were together as a family. Don was able to be with his uncles and cousins he doesn't often see. He and his brother were together in their grief. Everyone helped support Chet's widow. As we drove home last Sunday I had a positive feeling about the time we all spent together.

After: But after we got home and brought in the seven boxes of family photos and paraphernalia we need to go through, after we collected the dog from the kennel, after we drove Carly back to the airport for her return trip to NYC, after we went back to work on Tuesday to our demanding jobs... the grief remains. It is a grief which is just percolating under the surface at all times ready to swamp us at a moment's notice. For a month I feel like I have been curled up in a ball nurturing this grief. Shockingly, the one thing that has really seemed to go by the wayside is my desire to read and to blog. I don't have the attention span for either of these activities. This weekend I had signed up to participate in a blog event: a 24-hour readathon. It seemed like a good idea at the time but even with this impetus behind me I can barely make myself read and when I do my reading is very slow, which is not like me. But one book I am finding which has provided some relief is a poetry book called Leading from Within. Poetry always seems to speak to me when other forms of communication can't get through.

Let Me Remember...a poem which reminds me of our transitory lives here on earth but of an eternity to look forward to.


beyond forgetting —
let
me
remember—
let me remember always
for my spirit is often shrouded in the mists
let me remember beyond forgetting
that my life is not a solitary thing
it is a bit of the rushing tide
a leaf of the bending tree
a kernel of grain the golden wheat fields
a whisper of wind about the mountaintop
a reflection of sunlight upon the shining waters
it is fleeting
it is of the moment
it is timeless
it is of eternity.

Posted by Anne@HeadFullofBooks at 5:24 PM