TTT: Ten Literary Villains that I love to hate!

1.  The White Witch (Lion, Witch, and the Wardrobe by C.S. Lewis)- the first literary villain that I was actually afraid of as a child because of what I believe that she represents.

2.  Lord Voldemort and other Death Eaters (Harry Potter series by J.K. Rowling)-Duh!  Bet just about everyone will have these guys on your list.

3.  Durza (Inheritance series [Eragon] by Christopher Paolini)-there are lots of villains in this masterful series, Durza is just one that comes to mind right now.

4.  Mrs. Coulter (His Dark Materials series by Philip Pullman)-I know that she does show some kindness along the way but she was conducting experiments on children to see what would happen if their daemons were detached...very evil and self-centered.

5.  Mayor Prentiss and Mistress Doyle (Chaos Walking series by Patrick Ness)-both thought the other was evil and were blind to their own manipulative ways.

8.  Bob Ewell (To Kill a Mockingbird by Harper Lee)-the evil racist who who attacks Scout and who wrongly accuses Tom Robinson of raping his daughter.

9.  President Snow (Hunger Games series by Suzanne Collins)-Shows how cruel and petty he is by retaliating against Katniss when she bested him by beating the Hunger Game rules.

10. It (A Wrinkle in Time by Madeline L'Engle)-is the biggest bully in the universe by targeting the weak and making them submit or he'll (it'll) destroy them.

11.  The Wicked Witch in Sleeping Beauty-of all the Fairy Tale witches this one was always the most scary to me.

The above villains are from my original list created in 2010. Here are some additional villains I now add to the list in 2016:

14. Miss Trunchbull (Matilda by Dahl)- She is mean, mean, mean to little kids.

16. Queen Levana (Cinder by Meyer)---she is the most spoiled and self-centered of all villains. 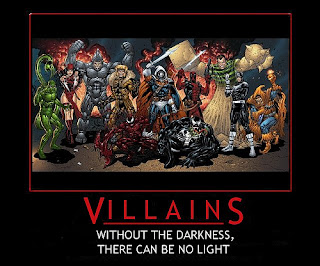 Who are some literary villains that I missed?