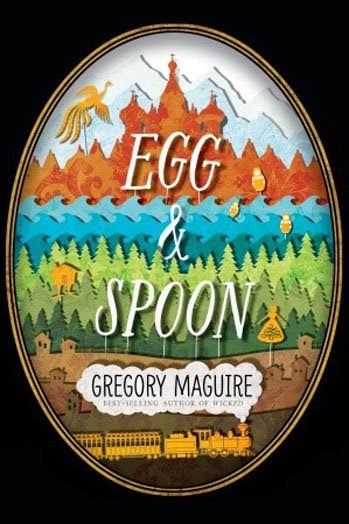 Do you judge a book by its title or cover? If so Egg and Spoon by Gregory Maguire might cause you to pause before picking it up. Egg and Spoon? What a weird title. I don't want to read a book about eggs or spoons. Do you? Would it help if I told you that the "egg" is actually a Faberge egg? And not just any Faberge egg but one which has elaborate designs on three sides? It holds scenes related to Russian folklore of Baba Yaga's hut, the mythical ice dragon, and the legendary Firebird. As the egg's position is shifted, the different scenes come into focus and with this focus shift come shifts in the story line.

Maguire, the author of Wicked, is the master of re-imagining well-known stories by placing plot twists and fantastical characters to add zing and interest to old stories. In Egg and Spoon, Maguire blends history and current events into the old Russian folktales making the stories come alive on several levels.

The story begins in a little village somewhere in Russia with Eleana, a starving child left alone to tend a dying mother. When a train is waylaid in her village, Eleana meets a young, rich traveler, Ekaterina, who is en route to meet the Czar and to attend a party for his godson. The girls, who look remarkably similar, strike up a bit of a friendship. Through a series of events the girls end up trading places in the Prince and the Pauper style but neither holds the new position for long. As the train carries Eleana away from her home and as Ekaterina attempts to reconnect with her entourage, the girls each have adventures that involve Baba Yaga, the Firebird, and eventually the ice dragon all in an attempt to save the magic that seems to be fading in Russia.

Leigh Bardugo, writing for the NYT Sunday Book Review says, "In Egg and Spoon Maguire sets his characters the fundamental challenge of stepping outside themselves and acknowledging the wider world and giving up the pleasure of being the center of the narrative. Sometimes he even lets them succeed. Readers may hunger for heroic deeds, but it is impossible not to root for girls and witches and aunts alike, and to cheer their little victories as acts of grace" (NYT-Aug. 22, 2014).

I started reading Egg and Spoon in January hoping to finish it prior to the selection of Youth Book Awards handed out at the ALA midwinter meeting the end of the month. As I read the book I became increasingly convinced the it would indeed win an award or two and, in my opinion, deserved to do so. Unfortunately the book was not selected for any awards, which is mystifying in itself, but thankfully I completed it anyway and loved it. Reading it was such a joy on so many levels. I actually listened to the audiobook version of Egg and Spoon. It was read by voice actor Michael Page. What a magical job he did with the material which is also magical in nature. Go to this webpage for an audio sample of the book. See if you agree with me.

As I write this review I wonder if the book didn't win any awards because no one could figure out where the book fits in the literary world. Is it for middle grade students or does it appeal more to teens and should be classified as YA? As I listened to the book I kept thinking how much fun it would have been to read this aloud to my daughters when they were young. In fact, I recommended it to a friend who has a son in upper elementary school to use as a family read-aloud. So far I haven't found the perfect reader at the high school level for Egg and Spoon but I won't quit trying.  I hope they can overlook the cover and title and dive right in. It is really too magical to miss.

Posted by Anne@HeadFullofBooks at 2:22 PM