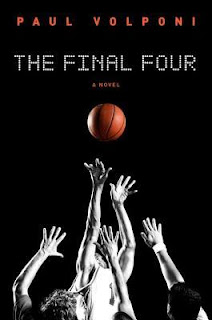 Perfect timing. It's Saturday morning. My husband is sitting around sipping coffee, watching a NCAA Basketball Tournament game on TV. Off in a corner I sit reading a book entitled The Final Four by Paul Volponi. It is a fictionalized account of a basketball game in this very tournament. After finishing the last page I lift my eyes to notice the action on the TV screen where two teams are battling for a win so they can advance to the next level. The action on the screen reminds me of the description of action in the book. Right on schedule.
The Final Four, which earned a starred review in School Library Journal this month, highlights the lives of four of the players in a semifinal game of the tournament. The stories of Malcolm and MJ from the favored Michigan State Spartans, Roko and Crispin from the underdog Troy University Trojans are interspersed with action from the game. Journal entries, TV interviews, flashbacks, and newspaper accounts are the literary techniques used to introduce us to the characters. While play-by-play, color commentary, and court-side interviews bring the action and the excitement of the game to the readers. Malcolm, who is the least likeable character in the book, is very clear about using his time on the team as a stepping stone to the NBA. He also points out the exploitation of college athletes while the schools and teams rake in money from their unpaid efforts.
Even though I do not consider myself to be a big basketball fan, I found this book to be exciting and the back stories very compelling.  In fact, after reading The Final Four I have more interest in the NCAA tournament that is playing in the background of my life right now.  "With exciting game action and a candid exploration of the hypocrisy inherent in so-called amateur sports, this gritty, realistic, and riveting novel deserves the wide audience it will no doubt attract" (Richard Luzer, SLJ). I agree with Luzer. Librarians, if you don't have this book in you library, buy it quick! It is going to be a favorite among your readers who are sports fans or those who like stories with lots of action.