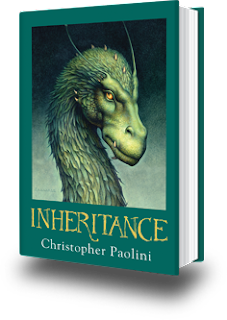 Today ---seven years after beginning The Inheritance Cycle series---I said good-bye to Eragon, Saphira, and a whole cast of beloved characters, with the competition of Inheritance, the fourth and final book in the series. This farewell was a surprisingly emotional experience, too. I found myself feeling tearful as the end of the book neared. Gerard Doyle, the reader of the audiobooks for the whole Inheritance Cycle series, said he felt quite emotional while recording Inheritance. While addressing an audience at the book's opening party, he admitted that occasionally these feelings overwhelmed him so much that he would have to leave the recording studio and go for a walk to clear his head. Students returning this book to the library have all commented that they can't believe that the series is really over, that we will learn no more about Eragon and Saphira. Remember what it was like to finish the final book in the Harry Potter series? I felt a mild sense of depression and a sadness that I wouldn't have any more adventures with these beloved characters.  I feel the same way now as I did then.

Many reviewers have mentioned the length as a detriment to their enjoyment of this book.  I didn't feel this way. As a member of the Army National Guard my husband says that the Army has an unofficial slogan: Hurry up and wait. The action in the battle scenes had to be preceded and followed by lulls. Kings and queens, dwarfs and elves, riders and dragons had to plan strategic moves and rest. Readers had to learn new information about characters and settings. Characters had to move from point A to point B. I was fine with "living in Alegasia" for several weeks as I read/listened to this book. I savored my last journey with Eragon and company.


“Paolini’s fans, who have spent over 2,000 pages and eight years rooting for his hero, will cheer the final flight.” -The Washington Post

One thing that I really appreciated about the whole series is that the author, Christopher Paolini, does not insult the intelligence of the reader.  If he mentions details in the second book he expects the reader to remember them in the fourth. He does not reiterate things that we already "know." Several of my students reread the first three books in preparation for Inheritance. I didn't.  I just bumbled along if events/locations were mentioned that I had forgotten.  Preferring that to feeling insulted by tedious repetition.

I half listened/half read Inheritance. The idea of listening to 28-hours of the audiobooks loomed as a daunting task. So I opted to alternate between listening and reading.  Gerard Doyle does such a masterful job as the reader of this series making the books seem even more magical.  Another bonus to listening to the audiobooks is Doyle does the tough pronunciations for us. Whew!  No need to consult the pronunciation guide at the back of the book.