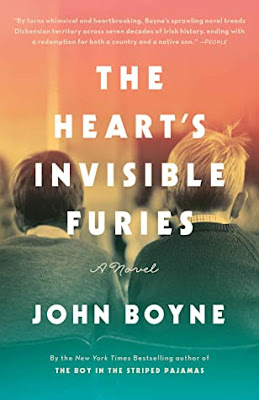 Long before we discovered that he had fathers two children by different women, one in Drimoleague and one Clonakilty, Father James Monroe stood on the alter of the Church of Our Lady, Star of the Sea, in the parish Goleen, West Cork, and denounced my mother as a whore.

I faced two problems at an early age, one of which might have been the natural result of the other. I was cursed with a stutter that seemed to have a mind of its own -- it would be there some days and disappear on others -- and it had the ability to drive both my adoptive parents to distractions.

Summary: The Heart's Invisible Furies opens in a tiny village in the county Cork in Ireland in 1945. The parish priest spends part of the service condemning Catherine Goggin, a sixteen-year-old girl who recently discovered she was pregnant. The priest not only condemned her in front of the whole congregation but banished her from the village with her family's blessing. This was the inauspicious beginning of the life of Cyril, a boy given up for adoption the day he was born to Charles and Maud Avery. His adoptive parents never let him forget that he wasn't a real Avery. So begins the life and journey of a boy who turns into a man who never feels like he belongs, either in the world or in his body, since from a young age he recognized that he was attracted to men, not women. “Even at that tender age I knew that there was something about me that was different and that it would be impossible ever to put right.” His whole life, which takes place over the 500+ pages of the novel, is about the struggle Cyril has finding and accepting himself. The novel ends near the end of Cyril's life when finally the reader senses that as the laws in Ireland changed in openness to homosexuality, so did Cyril's acceptance of himself and he has finally found peace within.

Review: The brilliance of The Heart's Invisible Furies is how Boyne took a topic -- homosexuality in Ireland, a Catholic country -- and gave this history a life through Cyril's life. There was a ton of humor also, but anger and pain seethed underneath the surface of every page.

The past is never neutral, but must be fought over and claimed. Cyril, a boy who knows he is gay in a society that hates his sexuality, will take decades to unlearn a history of crippling guilt and shame, while at the same time truly weighing his own weaknesses. The book blazes with anger as it commemorates lives wrecked by social contempt and self‑loathing (The Guardian).

Several book-blogger friends recommended The Heart's Invisible Furies to me, one even ranked it among her top ten favorite novels. I didn't love it that much. For one thing, the book was very long and I found myself dreading the next bad thing that awaited Cyril as he trudged through his life. I also found myself cringing at several of his decisions, which clearly led to more bad stuff. I always hate movies where one or more of the characters make stupid decisions which causes chaos. I felt the same way about Cyril. I knew he was afraid to let anyone about his sexuality therefore he kept making decisions which caused more problems in his life. But it drove me crazy. I wanted to shake him and tell him to stop!

Surprisingly, however, parts of the book were hilariously funny. Cyril would make snide comments in the dialogue. I supposed he used humor to deflect the truth. Taken in totality, I rated the book 4 out of 5 stars. I understand it is an excellent audiobook, which makes me angry at myself for not even trying to find it in that format. It is a good selection to read during Gay Pride month.

Posted by Anne@HeadFullofBooks at 10:54 AM