Top Ten Books I am look forward toward their releases in 2014:

1. Raven Cycle #3 by Maggie Stiefvater...at least I hope this book is coming out in 2014, it is as of yet unnamed on Amazon.com. I love the character development, the mystery, and the surprising plot twists in this series.

2. Cress (Lunar Chronicles #3) by Marissa Meyer...First Cinder (Cinderella), then Scarlet (Red Riding Hood), and then this book which will be a retelling of Rapunzel's story. Can't wait. (February 2014) 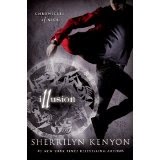 3. Illusion, the 4th book in the Chronicles of Nick series by Sherrilyn Kenyon. I haven't read the books in this series but boys are just crazy for it in my library and are asking for the next book which is due out in April 2014.

4. Perfect Lies by Kiersten White, the second book in the Mind Games series. I haven't read the first book in this series either but everyone who has read Mind Games has commented on how much they like it and are anxious for the sequel. (February 2014)

5. City of Heavenly Fire by Casandra Clare...the fifth or sixth book in the Mortal Instruments series which is still wildly popular in the library. (May 2014)

6. Landline by Rainbow Rowell. I am a Rowell fan and look forward to reading an adult book by this favorite YA author. (July 2014)

7. Dreams of Gods and Monsters by Laini Taylor. The third book in the Daughter of Smoke and Bone series which will conclude the fight between angels and demons. (April 2014)

8. Lair of Dreams by Libba Bray, #2 in the Diviners series. I just Libba Bray and will read anything she writes. (August 2014)

9. Laurie Halse Anderson has a new book coming out in 2014.  Must investigate!
It is called The Impossible Knife of Memory and it is due out in January. Yipee!

It is so hard to keep track of all the series that my students are reading. I look forward to reading other lists on Top Ten Tuesday and may add some more titles as I do.

Posted by Anne@HeadFullofBooks at 8:28 PM