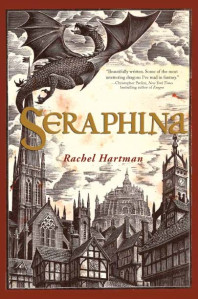 “Four decades of peace have done little to ease the mistrust between humans and dragons in the kingdom of Goredd. Folding themselves into human shape, dragons attend court as ambassadors, and lend their rational, mathematical minds to universities as scholars and teachers. As the treaty’s anniversary draws near, however, tensions are high. Seraphina Dombegh has reason to fear both sides. An unusually gifted musician, she joins the court just as a member of the royal family is murdered—in suspiciously draconian fashion.

Seraphina is drawn into the investigation, partnering with the captain of the Queen’s Guard, the dangerously perceptive Prince Lucian Kiggs. While they begin to uncover hints of a sinister plot to destroy the peace, Seraphina struggles to protect her own secret, the secret behind her musical gift, one so terrible that its discovery could mean her very life." From the official jacket blurb

I listened to this exquisitely written fantasy debut by Rachel Hartman on audiobooks. As the last disc finished up and as I sat in the afterglow of the book with the characters swirling around in my head I gradually became aware of the music on the car radio. As the song ended the DJ said "Imagine Dragons, It's Time."  What? How did she know that I just read a book about dragons and was thinking it was time for me to share my love of the book with the world. I thought I was hearing things.  Honestly.  It wasn't until I heard the song again that I realized there is a music group called Imagine Dragons and their current hit is It's Time. Ha! Check it out here on Imagine Dragons Facebook page.
Rachel Hartman created a rich, complex, and utterly original world in Seraphina. The heroine's "tortuous journey to self-acceptance is one readers will remember long after they’ve turned the final page.” Not a usual fantasy reader, I was shocked at how completely I was swept up in the story. All the characters we unique and complex. The setting lush and fully imagined. The plot complex and interesting. I liked everything about this book. And...I understand that it is the first book in a trilogy, though I found the ending to be quite satisfying.
I just bumble along on my reviews while others find eloquent ways to express their devotion to this book. I am jealous of their writing ability.  I really want you to go and read one of those wonderful reviews written by Karyn Silverman over at SLJ. You will get a much fuller idea of just how magical this book really is.  If I was giving out stars this one just earned five!

Posted by Anne@HeadFullofBooks at 8:59 PM