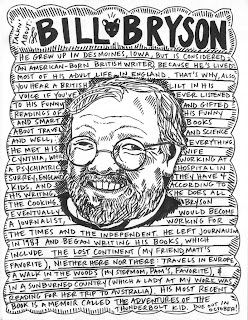 I've known for a long time that I love Bill Bryson but I had this opinion reinforced twice this summer after listening to two more of Bryson's books-on-CD: William Shakespeare-The World As Stage and The Short History of Nearly Everything. Bryson narrates his own books and his sense of humor really shows up in this medium. Bryson makes history accessible and fascinating and funny or weird. In the Shakespeare book he takes all the millions of items on the Bard and sifts through them and picks out fascinating and essential information while cutting through "the crap". He also highlights lots of the misinformation about Shakespeare, and believe me there is a lot of misinformation about him out there. For example, did you know that the theory that Shakespeare wasn't the author of his all his plays and sonnets was started by a mentally ill woman from Ohio who was fascinated by Frances Bacon because he was her namesake? In the Short History of Nearly Everything Bryson essentially wraps up the history of science from the beginning of time until now. No small task but he does it in a very accessible was. I can highly recommend both of these books to anyone who wants to learn about about science or Shakespeare but doesn't want to get bogged down in a heavy, unreadable book.

Here are my grades for his books (those I have read):
Shakespeare: World As Stage- 5 out of 5 stars
A Short History of Nearly Everything- 5 stars (the CD version is abridged)
The Life and Times of the Thunderbolt Kid: A Memoir- 4 1/2 stars (It is about growing up during the 1960s. I can relate.)
A Walk in the Woods: Rediscovering America on the Appalachian Trail- 5 stars (Hilarious.)
In a Sunburned Country- 5 stars (Touring Australia. It makes me want to go there also. Very funny.)
I'm a Stranger Here Myself: On Returning to America After 20 Years- 3 1/2 stars (Essays on America. Written in 1998 I think it is just a bit too dated now to be completely relevant today, though his sense of humor is intact.)
Posted by Anne@HeadFullofBooks at 1:19 PM