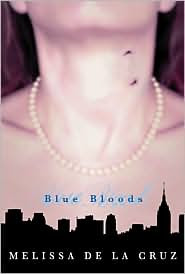 Twilight fans should gear up for another exciting vampire series. I actually read this book so that I could make recommendations for my library readers. Many feel lost after completing the Twilight series but still crave fanciful stories of vampires and magical powers. This book, and the other two books in the series, seem like the logical next step. This book is set in NYC and bluebloods are not only vampires, they are also the members of high society in town.

Though it would seem that this book is just another vampire knock-off, it is actually very well written and extremely inventive. It also incorporates actual historical events and puts a new twist on them. For example, what really happened to the pilgrims of Roanoke Island?

Though these books are not R-rated, I would say that they are better suited for the high school aged reader than the middle-school aged kids. Look for the sequels: Masquerade and Revelations.

YA Lit; Audio CD; My rating: 4 stars.
Posted by Anne@HeadFullofBooks at 3:05 PM